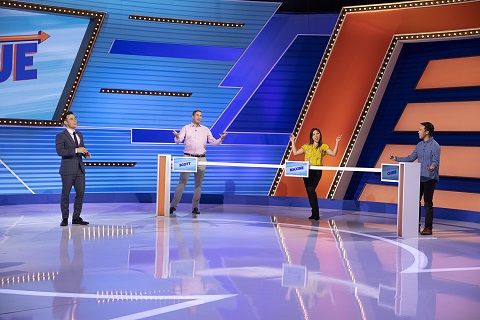 Get a Clue is returning for its second season on GSN. Hosted by Rob Belushi,  the game show follows two teams competing against each other in a fast-paced word competition.

“Season 2 of GET A CLUE will premiere on Monday, January 4 at 4:30 p.m. ET on Game Show Network and air weekdays.

GET A CLUE is a fast-paced, high energy clue game in which two teams compete to see who can successfully guess the most answer words before time runs out. In the first round, teams will receive a list of answer words they get to play. The fun starts as the first player gives clues to the second player who tries to correctly guess the word, then the second player gives clues to the third player, and so on, until the team either guesses all the words in the category or runs out of time. The team with the most points advances to the bonus round to play for $10,000. They’ll have 60 seconds to guess eight words but the entire team has to stay on their toes because the clue givers, and guessers, change randomly with every new word.”

What do you think? Are you a fan of Get A Clue? Do you plan to watch season two on GSN?

Truly I find Rob Belushi horrible host! He is really very loud and annoying! Game not so bad but can’t watch due to Mr. Balushi !

I Love Rob Belushi !! I think he is adorable!! I love the show!!

I love Get A Clue!! What happened to it? I hope you haven’t canceled it.

Where is Get a Clue? That is my favorite game show on GSN. I hope you didn’t take it off!

I love to watch Get A Clue. It is one of my favorite shows to watch.

I don’t like get a clue. I don’t like the host. I’m sorry but he just acts and sounds weird. I might like the show with a different host. When the show comes on I change channel’s.

I love get a clue especially Rob Belushi. Please don’t take it off ! I will absolutely watch it!

Love Rob Belushi and Get a Clue. It was taken off in the afternoon & 2 MasterMinds on. I love MasterMinds too. So happy!! I just found Get A Clue by accident at 9:30 a.m. but I don’t watch TV in the morning. Please put it bsck on in afternoon!!

We like The Clue and hopes there will be another season after the second!

I agree with Suzanne…I love Get a Clue and it is not on but that absolutely horrible program People Puzzler with that absolutely ugly, stupid and mean host, Lea something is on every night and now it going to be on weekends while some of the fun to watch programs disappear.

I love the game show get a clue. One of my favorites. Please bring bk in the afternoon. My family and friends really miss it