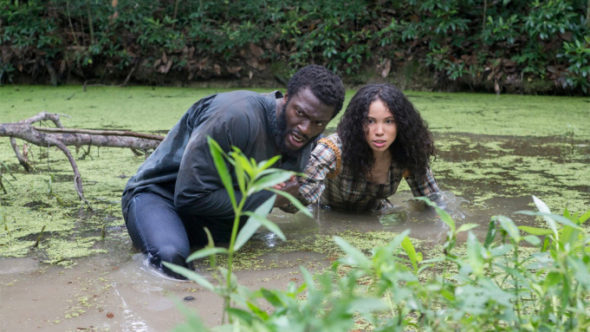 Underground is coming to OWN next month, and the cable channel has a new special, Revisiting Underground, planned for premiere night. Musician and Executive Producer John Legend will host the half-hour special which will take viewers behind-the-scenes of the series.

A period drama about the Underground Railroad in Antebellum Georgia,  the Underground series originally aired for two seasons on WGN America, from 2016 until 2017. Jurnee Smollett-Bell, Aldis Hodge, Jessica De Gouw, Alano Miller, Christopher Meloni, and Amirah Vann starred in the series. The OWN rebroadcasts of episodes will be augmented with cast introductions and additional footage.

OWN revealed more about the Underground special in a press release.

“OWN: Oprah Winfrey Network will air Revisiting Underground, an all-new half-hour special from Sony Pictures Television, immediately following the previously announced January 5 premiere on OWN of the critically acclaimed historical drama Underground on OWN at 9 p.m. ET/PT. The dramatic series acquired from Sony Pictures Television will have a revitalized presentation on OWN, with newly filmed episodic introductions by cast members, never-before-seen behind the scenes footage and more. The premiere episode has been expanded to 90 minutes, with Revisiting Underground debuting at 10:30 p.m. ET/PT.

Grounded in this moment of cultural shift, Revisiting Underground reminds us of the importance of taking history off of the shelves and bringing it into our daily lives. Executive Producers John Legend, Misha Green and Joe Pokaski, along with the cast and crew, share personal stories, reflect on their time working on the show, and discuss the power of activism and the relevance of the show today.

We’ll look at the research everyone did to prepare for their roles, hear their personal stories of challenges and triumphs from their time working on these intense stories, and explore the music of the show. Finally, we’ll share how the cast honors the heroes of the Underground with the activism in their daily lives.”

What do you think? Do you plan to check out Revisiting Underground and Underground on OWN? Did you watch this period drama on WGN America?

I pray OWN can continue Underground for a season 3. It was an amazing show. It’s very relevant today in these times to review our history. Great show.

I loved Underground and hope we can see Rosalee ,Noah, their baby and her family reunite. Please do another season this was an exciting,Heartwarming ,
and riveting tv show!

This is a great show.Everyone hoping it returns magnificent cast Spread the word watch this series

I really enjoyed season 1 and 2 of underground. I look forward to seeing season 3. They left us hanging. It would be great if we could see what happen at the end of the story.

This is an awesome show! I love my black people and love learning about my history as well as the challenges we’ve faced! Please consider a season 3! I would be sure to watch! It’s a story that needs to be told!

Hope you do produce other seasons following from where it was canceled, with season 3. The actors and storyline was fantastic. Would love to see what happens with Keto, Ernestine and Noah. Also what will happen when Harriet takes over the weapons. Please Oprah, stop making shows and not finish them.

It was originally a WGN series not OWN. Oprah I pray reunites cast for continuing the show. Great show. She is revisiting series.

I sure hope this series pick up from where it was canceled. Because American history classes lied all African Americans needs to see and learn that our ancestors just didn’t take being enslaved like cowardice submissive lackeys but they did resist, planned and fought back. And we did have white allies who helped them and died to get the slaves freed.

I sure hope it comes back on and this covid-19 virus is just slowed it down from filming.It was a great show

I was truly saddened when Underground was cancelled. This show focused on my people’s bravery, courage, intellect and strength. I saw slavery in a whole new light. And I gained a new perspective on black slaves and their plight. Underground gave me the opportunity to feel proud of my heritage…all of it. Our younger generations could learn a lot from this show. At age 55 I sure did. Hopefully a third season will be on the way.