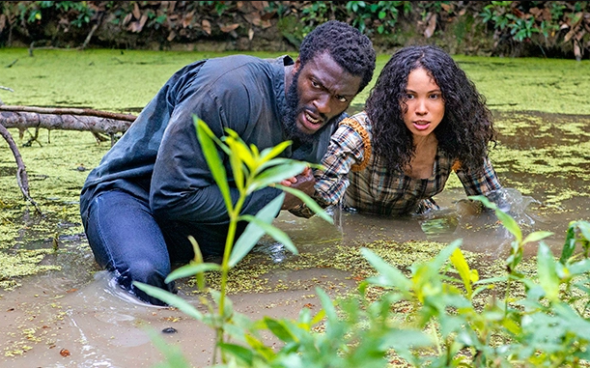 Underground may still have life left in it. Executive producer John Legend is still trying to save the cancelled WGN America TV show, Deadline reports.

As reported earlier, the network cancelled the historical drama in May after only two seasons. The historical drama follows the heroes of the Underground Railroad who harnessed every bit of their wits, strength, and grit in order to escape slavery and live as free men and women. The cast includes Jurnee Smollett-Bell, Aldis Hodge, Jessica De Gouw, Alano Miller, Christopher Meloni, Marc Blucas, and Reed Diamond.

On social media, Legend recently released a statement saying he, the cast, and the producers of Underground are committed to finding a new home for the series:

What do you think? Are you a fan of Underground? Would you watch a third season?

Yes, I love the series and would enjoy another season. Please bring it back.

Please air season 3 of underground! I recently discovered it on Hulu. I binge watched season 1 and 2 and I need to see season 3! What a great series! I need to know what happens to Noah and Rosalee and baby. And especially learn more about Harriet Tubman. What a great series I found to watch during black history month!

I was extremely disappointed how season 2 left so much to be desired Mr. Legend you touched something that can re define awareness of our youth and Investment bankers can’t understand so you Oprah and whom else of an iconic status should continue for it will be great work parallel to Alex Hailey.

Yes!! I would definitely watch a 3rd season of Underground. We all need to find out what happened to Rosalee, Noah and the baby.

I have been a huge fan of Underground since it first started in 2016! I even bought an Underground T-shirt from WGN America. I can’t believe it was canceled; I am truly saddened by this! I found it on Hulu and watched both seasons all over again….PLEASE do a third season!!! This show is SOOO good!

I adored this amazing show Underground. Best TV drama I have seen in ages. I pray Mr Legend finds a new home for this beautiful and interesting drama. Best historical drama for sure… I cannot believe it was canceled.. it’s far from over!! Too much more to be written. I’m a Canadian and this is a fantastic history drama.

I would love to see Underground 3 come back. The are far to many series not worth the time of day and not enough worth the viewing. This one has my vote. I say keep it going.

Thanks to HULU I was able to enjoy the show Under ground. I would definitely watch and rewatch a new season of Underground. I thought maybe Hulu would pick it up after WGN cancelled it. Watching this, resparked my interest in ‘this’ history. I HOPE IT RETURNS SOON!!

please bring this show back !!!!!! this is sad you can keep on fake shows that can fight and teach you nothing but have to fight for something interesting

I pray there is season 3