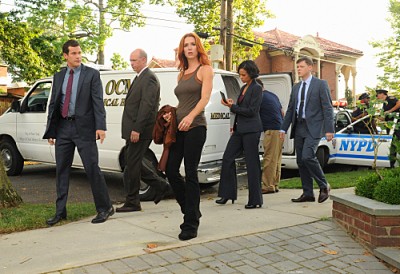 As we reported earlier, CBS has decided to “un-cancel” their 2011-12 drama Unforgettable and has ordered a second season. The 13 new episodes will begin airing next summer.

We’re now learning that, while the show will be back, not all of the castmembers will be reporting back to work. Poppy Montgomery, Dylan Walsh, and Jane Curtin are set to return but essentially the entire supporting cast is out — including Kevin Rankin, Michael Gaston, and Britt Lower.

The three stars were not surprisingly instrumental in Unforgettable being revived and the show wouldn’t have gotten a second season without them. The supporting cast being replaced is part of what the producers are calling a “new creative direction” for the crime drama.

There’s no word yet on who will replace the performers who have been dropped. That casting will likely be a good indication about what “new direction” viewers can expect to see next summer.

What do you think? Will you miss these performers and their characters? Do you think the changes will help or hurt Unforgettable’s chances for a third season?

I can’t believe they were going to take this great show off the air! The cast was great! I am sick and tire of reality shows that show just how stupid people are. We needed a show with imagination and creativity and this was one of them. Just wish it was on this Fall. With all the stress in the world today, it is nice to come home put your feet up and really enjoy a show. Unforgettable did this.

ONE OF THE NETWORKS FINALLY GOT IT RIGHT. UNFORGETTABLE WAS SUCH A GREAT NEW SERIES THAT WAS DIFFERENT FROM WHAT NETWORK TV HAS BEEN FEEDING US LATELY. NOT A REALITY SHOW, SOMETHING TO SIT BACK AND ENJOY. THANK YOU , RK.

I am not terribly sad that CBS decided to drop three members of the supporting cast on Unforgettable. The three were not memorable characters. I just want the series back with Poppy Montgomery!!! It has been very upsetting to me to hear that the show will not be back on the Fall line up. It is a great show!!! I would miss meetings just so I would be home to see it!

I am glad CBS has changed there mind & decided to bring Unforgettable back! As far as cast goes im glad the beautiful Poppy Montgomery will be back considering shes the one with the memory! I just wish they had brought it back for a 22 episode season. I liked her when she was blonde headed on Without a Trace. Love watching her acting!

I totally agree with Bethany! It’s hard to get the feel of the characters when they have such a turnover. It gets pretty tiresome trying to find a new show that you like and can look forward to, just to have it cut (or forced to change so much that it doesn’t even resemble the same show), heaven forbid you get invested in it! They should just leave them alone and give them a chance to develop.

What about Daya Vaidya? She was the only character who actually sounded like she lived in New York. Considering the pretty good ratings the show had, they didn’t really need to tweak the cast like a bottom feeder like Body of Proof might. Especially, since the show will be on during the summer season.

Kevin Rankin was part of what made it awesome!

It’s not surprising they’d make cast changes; most of the supporting cast were, well, boring. Rankin’s character started to get interesting toward the end, but I’m not surprised his character was caught up in the sweep, too. Jane Curtin was a great addition, though.

The real problem on the show is weak stories. Take away Carrie’s “schtick” and there is nothing to really distinguish the stories as anything other than very standard cop-fare. If the show is to have a chance next summer, they need new writers, too.

Mike can return to being antagonized by Patrick Jane.

I hate it when they mes with it like that. Doesn’t make it seem to real does it? I will probably watch, but not be happy. Same with the messing up of Body Of Proof ABC is doing .

I totally agree. They can never leave well enough alone, and never let a show simply progress as it was meant to. Back in the “olden days” when they used to let shows go for years past their expiration dates. They also used to leave shows on the air for at least a year before they would threaten cancelation or change the show so severely that it was next to unrecognizable. Growing Pains was one of the worst shows that ever aired, that first year at least, but it came back stronger than ever and became one of the most… Read more »

I’m glad the show will be back and i can’t wait to watch it, but i’m really sad that they lost such great actors/actresses.

Awe that stinks I loved the original cast! Who knows the new cast may be alright also we just have to wait an see who they cast. I’m just hoping for a season 3 =]