— Captain Barney Miller (Hal Linden) is head of New York City’s 12th precinct but it may end up being the officers under his command that finally do him in! Among his subordinates is the ever-crotchety, ready-for-retirement Philip K. Fish (Abe Vigoda); philosophical, wisecracking Nick Yemana (Jack Soo); naive but goodhearted Det. Stanley “Wojo” Wojciehowicz (Max Gail); ambitious, arrogant Det. Ronald “Ron” Nathan Harris (Ron Glass); and dauntless Chano Amanguale (Gregory Sierra). As Miller struggles to balance the personalities in his precinct he also has to deal with the criminals of New York City — and his hatred of paperwork. This three-disc set contains 22 episodes.

— Razor-tongued chef Gordon Ramsay returns for the second season of this hit program that’s part reality TV and part cooking show. Series two puts a big focus on the importance of Sunday lunch, with Ramsay teaching average families how to prepare easy-to-learn gourmet dishes. The other focus of the series is Ramsay’s restaurant, where he recruits teams of newbie chefs to prepare meals for 50 diners — diners who, if they aren’t satisfied with their meal, don’t have to pay a cent. This three-disc, 435 minute set has it all, including all of Ramsay’s infamous foul language.

— By day, Jason Hawes and Grant Wilson work as Roto-Rooter plumbers. By night, however, they and the rest of their TAPS team investigate claims of the paranormal. This set features the team visiting the most haunted in the ship in the entire U.S. Navy, as well as a sanitarium where someone is placing 911 phone calls to the police — even though there’s no phone in the building. They also visit a home where a small child says he hears voices and has mysterious scratches all over his body. They even investigate the plantation seen in Interview with a Vampire where 35 tourists all witnessed the same paranormal activity at the same time. This four-disc set contains over 700 minutes of spine-chilling footage.

— Tony King (Adam Paul) is a struggling actor who manages to land a job as the inept host of a home-makeover show on a low-rated cable network. In order for his career to take off, Tony has to survive his sexy co-host (Lila Mann) and his fed-up crew, as well as a string of insane celebrities who discover that their “free” renovations always come with a cost. This single disc contains eight episodes totaling 171 minutes of footage.

— Navy Cmdr. Harmon “Harm” Rabb, (David James Elliott) is an ace pilot turned lawyer who now works for JAG, an elite branch of military officers who investigate and prosecute those accused of crimes in the military — including those charged with murder, treason and terrorism. Harm and his colleague, Marine Lt. Col. Sarah “Mac” MacKenzie (Catherine Bell), struggle to keep their feelings for each from interfering with their professional relationship. Joining them in their work is Lt. Bud Roberts (Patrick Labyorteaux), a lawyer with a surprising breadth of knowledge, as well as their boss, former navy seal Albert Jethro ‘A.J.’ Chegwidden (John M. Jackson). The five-disc set contains 24 episodes totaling over a thousand minutes of footage.

— One of the shows that helped turn FOX into a full-fledged network is back for a tenth season, and Al Bundy (Ed O’Neill) and the rest of his family are just as dysfunctional as ever. This season, Peggy (Katey Sagal) lets her mother move in after she leaves Peggy’s father, Al can’t build a dog house in peace, sex distracts Bud (David Faustino) from studying, and Kelly (Christina Applegate) enters a bikini contest for a $100,000 prize. The family is joined by their equally dysfunctional neighbors, Marcy (Amanda Bearse) and Jefferson (Ted McGinley) D’Arcy. This set contains ten episodes on three discs, totaling 588 minutes of sitcom comedy.

The Marvel Superheroes, The Mighty Thor: Enter Hercules & Battle of the Gods — It may the age of live-action superhero movies but that doesn’t mean you can’t enjoy the classics! Made in 1967, these cartoons managed to bring these superheroes to life on screen for the first time. In “Enter Hercules”, Odin enlists mighty champion Hercules to beat some sense into his son Thor, who is in love with a human woman. The two mighty warriors clash in a great battle for the woman’s affections. In “Battle of the Gods” Thor’s brother Loki enlists the services of the Executioner and the Enchantress in a bid to get rid of Thor. This single disc set contains both episodes.

The Nanny: The Complete Third Season

— Fran Fine (Fran Drescher) returns as the Jewish girl from Queens who somehow managed to end up as the nanny to Max Sheffield’s (Charles Shaughnessy) kids; Maggie, Brighton and Gracie. This season also finds Fran dating more men than she can handle, hosting a sweet sixteen party for Maggie, and seeking help for her out-of-control shopping urges. It also features the moment everyone waited for since the attraction between Max and Fran became evident — Max finally admits his love! This triple disc set contains all 27 episodes.

— In 1988, the Scooby-Doo gang got a whole lot younger: junior-high age, to be exact. Despite the age change, Scooby-Doo, Shaggy, Velma, Freddy, and Daphne still manage to get themselves into all kinds of trouble, investigating mysteries like haunted dog collars, alarming amusement parks and haunted hairpieces. They even manage to find themselves aboard a spooky space shuttle! This two-disc set contains 17 episodes.

Sergeant Preston of the Yukon: The Complete First Season

— Sgt. Preston (Dick Simmons) is a Sergeant of the Royal Northwest Mounted Police who tries to maintain the peace and enforce the law across the frozen Yukon at the turn of the century. Joined by his sled team, which is led by the smart malamute dog Yukon King, Preston patrols the Canadian northwest during the winter months. This five-disc set contains 33 episodes and 870 minutes of footage.

— Peter Parker returns as the superhero Spider-Man in the second volume of the series. This time around, Parker has to survive the onslaught of super-villains Sandman, Shocker, and the unstoppable Rhino — and he has to manage to find a date for the fall formal. Then, when he comes face-to-face with the villain responsible for all the mayhem, he makes Spidey an offer that he may not be able to refuse. This single disc set contains three action-packed episodes.

— Things finally seem to be going in the right direction for Peter Parker. He manages to get a date with his crush, Mary Jane Watson, and she’s the hit of the Midtown High Fall Formal, making Peter one of the most popular guys in school. But superhero reality quickly intrudes as the Green Goblin returns and recruits many of Spider-Man’s greatest enemies, including Hammerhead and Tombstone. When Dr. Octopus joins them, Spider-Man’s got his work cut out for him — especially once the Green Goblin’s true identity is revealed. 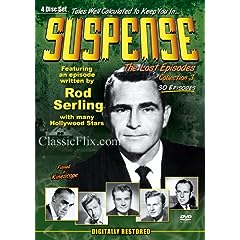 The Zeta Project: Season One

— A spin-off of Batman Beyond, this series revolves around Zeta, an experimental infiltration robot that’s equipped with weaponry. He also has a holographic self-projector that lets him assume any identity he wants — and can make himself look completely human. But Zeta is special is another way, his programming allows him to acquire both sentience and a conscience, and he flees from the U.S. government. Whilst on the run he meets Rosalie “Ro” Rowan, a street orphan who is fascinated by Zeta and attaches herself to him. The two set out across the U.S. to find both Roe’s parents and Zeta’s creator — the only one who can prove that the robot can act on his own free will. This double disc set contains 12 episodes.