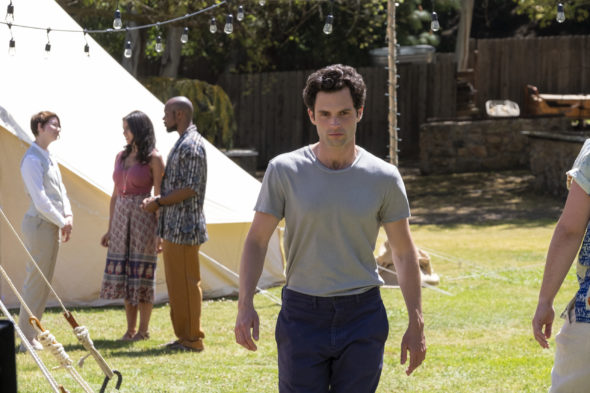 You is returning soon for its fourth season in 2023. Netflix has released a new teaser and has announced two premiere dates (since season four will be broken up into two parts). Starring Penn Badgley, Tati Gabrielle, Marienne Bellamy, with Lukas Gage, Charlotte Ritchie, Tilly Keeper, Amy-Leigh Hickman, and Ed Speleers, the series revolves around Joe Goldberg (Badgley), a former bookstore manager and a serial killer.

Netflix renewed the series for a fourth season ahead of its season three premiere. Production on the episodes began in March and wrapped last month. Season four part one will arrive on February 10, 2023, and part two will arrive a month later on March 10th.

Per Variety, season four will find Joe with a new identity and living in London. His new lady love, Kate, is played by Ritchie. The following was revealed about her role:

Ritchie will seemingly be Joe’s (Badgley) new leading lady, Kate, described as someone incredibly smart but also suspicious and completely closed off to those who aren’t her friends. According to Netflix, Kate is always “the adult in the room,” but also embraces the “icy bitch” moniker.

Check out the teaser for You season four below.

What do you think? Are you excited about the return of You on Netflix this February? How long do you think this series should run?