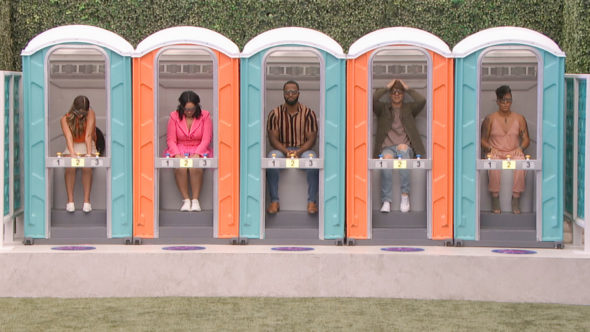 The 24th season of the Big Brother TV show on CBS is more competitive than ever. As we all know, the Nielsen ratings typically play a big role in determining whether a TV show like Big Brother is cancelled or renewed for season 25. Unfortunately, most of us do not live in Nielsen households. Because many viewers feel frustrated when their viewing habits and opinions aren’t considered, we invite you to rate all of the 24th season episodes of Big Brother here.

A CBS reality competition series, the Big Brother TV show is hosted by Julie Chen Moonves and typically airs three nights a week — Wednesdays (veto), Thursdays (eviction), and Sundays. The 24th season will find the Houseguests moving into the mid-century Palm Springs-inspired “BB Motel”. Players include an attorney, a Vegas performer, a hypnotherapist, a private chef, a chemical processing engineer, an interior designer, and a personal stylist, among others. The Houseguests this time around are Alyssa Snider (24), Ameerah Jones (31), Brittany Hoopes (32), Daniel Durston (35), Indy Santos (31), Jasmine Davis (29), Joe “Pooch” Pucciarelli (24), Joseph Abdin (24), Kyle Capener (29), Matt “Turner” Turner (23), Michael Bruner (28), Monte Taylor (27), Nicole Layog (41), Paloma Aguilar (22), Taylor Hale (27), and Terrance Higgins (47). Big Brother follows a group of people living together in a house outfitted with 94 HD cameras and 113 microphones, recording their every move 24 hours a day. Each week someone is voted out of the house. The last remaining Houseguest wins the grand prize of $750,000.

What do you think? Which season 24 episodes of the Big Brother TV series do you rate as wonderful, terrible, or somewhere between? Do you think that Big Brother should be cancelled or renewed for a 25th season on CBS? Don’t forget to vote, and share your thoughts, below.

Nice to see a nice mix of people from different walks and stages of life! They seem to be a more mature group – should see some great game play.

Thanks for posting this! Just to let people know, Marvin Achi has been replaced by Joseph Abdin (a 24 year old lawyer), so yeah. Looking forward to this summer’s season of Big Brother!