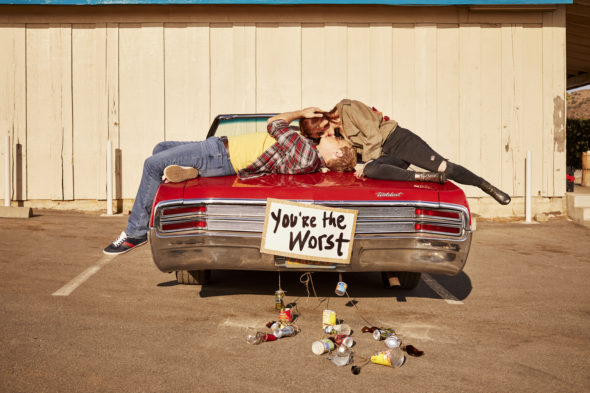 Is the fifth and final season of the You’re the Worst TV show on FXX the best one yet? As we know, the Nielsen ratings typically play a big role in determining whether a TV show like You’re the Worst is cancelled or renewed for season six. Unfortunately, most of us do not live in Nielsen households. Because of that, many viewers are frustrated their viewing habits and opinions weren’t considered, before FXX decided to end You’re the Worst with its fifth season. We care what you think, so we invite you to rate all of the You’re the Worst season five episodes for us here.

An FXX dark comedy, You’re the Worst stars Chris Geere, Aya Cash, Desmin Borges, and Kether Donohue. The story centers on Jimmy Shive-Overly (Geere) and Gretchen Cutler (Cash), who met at another couple’s wedding. The series explores modern love and happiness through their eyes, as neither of them have had much success in either arena.

What do you think? Which season five episodes of the You’re the Worst TV series do you rate as wonderful, terrible, or somewhere between? Should FXX have cancelled or renewed You’re the Worst for a sixth season? Don’t forget to vote, and share your thoughts, below.

I love this show, the cast and the premise. It is rapid fire comedy at its best. The cast is excellent in their delivery. The writers are doing a great job in providing hysterical episodes! It should not be cancelled!