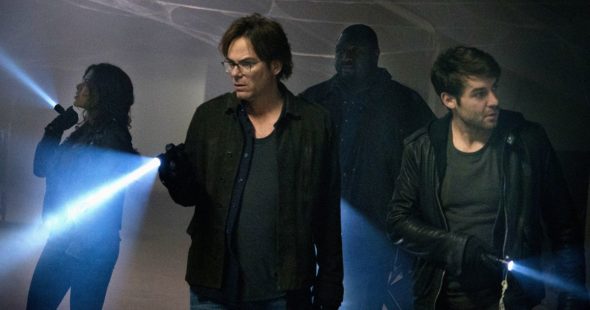 It looks like the Zoo has been closed. CBS has decided to cancel their low-rated Zoo TV show after three summer seasons.

The series never drew a big audience for the network but it managed to hold on for three seasons. The first season averaged a 1.06 rating in the 18-49 demographic with 6.40 million viewers. The second season dropped by more than 30%, averaging a 0.74 in the demo with 4.45 million. This past summer, the third season saw even bigger declines and averaged a 0.51 in the demo and 2.65 million.

Zoo was produced in-house by CBS Television Studios. It was profitable thanks to a deal with Netflix to stream the show once its seasons finished airing. Because of the deal, the series was profitable before an episode had even aired. Salvation, which was recently renewed for a second season, is part of a similar deal with Amazon.

What do you think? Did you like the Zoo TV show? Do you think that CBS should have cancelled it or, renewed it for a fourth season instead?

Need to continue , What is the point discontinuing it abraptly , it means wasted my time watching 3 seasons , without an ending

I NEED TO KNOW HOW IT ALL PLAYS OUT AND HOW IT ENDS!!!! IF A SHOW IS DUE TO BE CANCELED THEN AT LEAST HAVE THE DECENCY TO GIVE THE AVID VIEWERS AND FANS CLOSURE!!!

Need to continue the episodes

While I didn’t care for some of the direction the show was taken, I did want to see it resolved. It’s too bad they couldn’t have done a two hour episode/movie/show that completed the series. My wife and I streamed it on Netflix and watched all three seasons. We finished it tonight, but wish they could have finished it.

Please. It must continue. Too many shows and movie franchises get cancelled.

Wth how could you leave us hanging like that? So upset right now! Loved the show ! You need to give us closure! So tired of networks doing this crap!