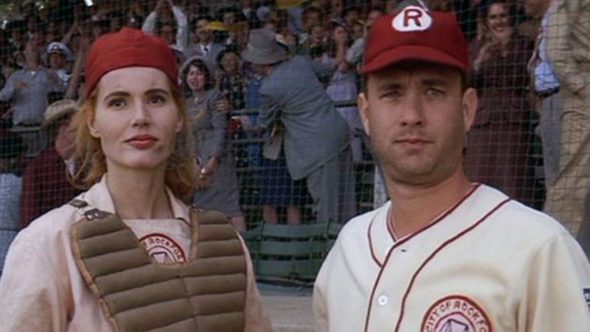 A League of Their Own is coming back. Amazon has ordered a series based on the 1992 Penny Marshall film, which stars Tom Hanks, Geena Davis, and Madonna. The TV series will star Will Graham and Abbi Jacobson. She also serves as creator and executive producer.

This new hour-long series will follow the lives of a new group of women with the dream of playing professional baseball.

Amazon revealed more about the series in a press release. Check that out below.

“Amazon Studios announced today that it has ordered a pickup of the new hour-long series A League of Their Own, from Sony Pictures Television, with executive producers and co-creators Abbi Jacobson (Broad City), who also stars, and Will Graham (Mozart in the Jungle).

This reinterpretation of A League of Their Own evokes the joyful spirit of Penny Marshall’s beloved classic, while widening the lens to tell the story of an entire generation of women who dreamed of playing professional baseball. The show takes a deeper look at race and sexuality, following the journey of a whole new ensemble of characters as they carve their own paths towards the field, both in the League and outside of it.

“28 years ago, Penny Marshall told us a story about women playing professional baseball that up until then had been largely overlooked. We grew up obsessed with the film, like everyone else. Three years ago, we approached Sony with the idea of telling a new, still overlooked set of those stories. With the help of an enormously talented team of collaborators, an amazing cast, and the devoted support of Amazon to this project, we feel beyond lucky and excited to get to bring these characters to life.” said Graham and Jacobson. “It took grit, fire, authenticity, wild imagination and a crackling sense of humor for these players to achieve their dreams. We’re hoping to bring audiences a story with all of those qualities.”

“There’s no crying in baseball, or at Prime Video,” said Vernon Sanders, Co-Head of Television, Amazon Studios. “Will and Abbi have taken a classic movie, reimagining it for a new generation with new characters and their own fresh, modern vision on a timeless story of big dreams, friendship, love, and, of course, baseball. We’re so excited to partner with Sony to bring this emotional, exciting new series to our Prime Video customers around the world.”

“Abbi and Will have done a masterful job of reimagining this timeless classic. We are very thankful to our partners at Amazon for bringing this incredibly relevant and important story to audiences around the globe,” said Jeff Frost, President of Sony Pictures Television.

What do you think? Will you watch the new A League of Their Own series on Amazon? Do you remember the film?

I will definitely check it out.