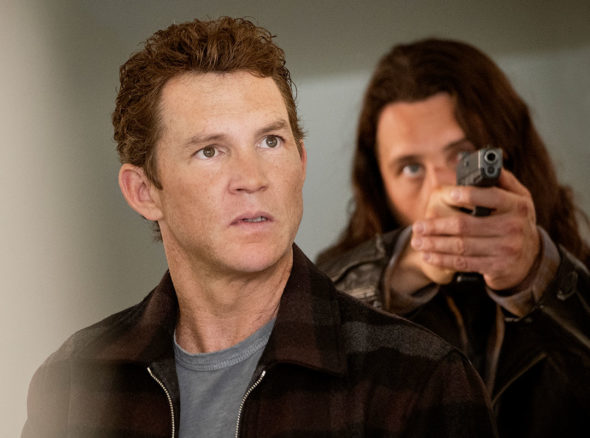 Who will come out on top in the fifth season of the Animal Kingdom TV show on TNT? As we all know, the Nielsen ratings typically play a big role in determining whether a TV show like Animal Kingdom is cancelled or renewed for season six. Unfortunately, most of us do not live in Nielsen households. Because many viewers feel frustrated when their viewing habits and opinions aren’t considered, we invite you to rate all of the fifth season episodes of Animal Kingdom here.

A TNT crime drama, Animal Kingdom stars Shawn Hatosy, Ben Robson, Jake Weary, Finn Cole, Sohvi Rodriguez, Leila George, and Jon Beavers. The story revolves around the Cody crime family who has now lost its matriarch. In the fifth season, Pope (Hatosy), Craig (Robson), Deran (Weary), and J (Cole) are still dealing with the fallout from the events surrounding Smurf’s death, including family members out for revenge. With their kingdom without a leader, the Codys struggle to maintain their fragile alliance and to see which of them will come out on top. Meanwhile, they search for more information on Pamela Johnson whom Smurf made the beneficiary of her estate. And back in 1984, an increasingly volatile 29-year-old Smurf is forging her own path raising Pope and Julia and leading the charge on dangerous jobs with new and old friends.

What do you think? Which season five episodes of the Animal Kingdom TV series do you rate as wonderful, terrible, or somewhere between? Do you think that Animal Kingdom should have been renewed for a sixth and final season on TNT? Don’t forget to vote, and share your thoughts, below.

Is this not the final season? a comment below says it was renewed for a 6th.

I liked the season 5 premiere after waiting over two years but Ellen Barkin is definitely missed and the ratings really dropped. I will stick with it though and anxious to see if anyone else is killed off this season as in the movie. Glad it was renewed for a sixth season.

Won’t watch it at all, nor will I give it a chance because Ellen Barkin is no longer in it. The show deserves to tank.
The producer is a sexist, ageist jerk and thinks Ellen couldn’t deliver to fans in the 18-49 demographic. Meanwhile, she was the best and the show is lost without her. Good riddens.

Awesome season premiere! I should have watched a recap of season 4 first since its been 2 years but still off to a fantastic start. (Guess what…Nielsen household here! They actually send cash in the mail for completing questionnaires! its awesome!)

Love this show since day 1.
I miss Ellen Barkin alot, but episode one was fantastic with the younger actress playing a younger smurf.
The actors/actresses on this show are fantastic
Pope is amazing in his creepy role.
Can’t wait for season SIX.

Excellent TV Series. Very good acting. I hope Animal Kingdom is renewed for a 6th season! I record and watch every weekly episode.

It has already been renewed for a 6th and final season. Announced back in April. Hate that its ending but happy we’re getting a 6th season.

This show will never get “old” It is sooooo well done and i like all of the characters!!