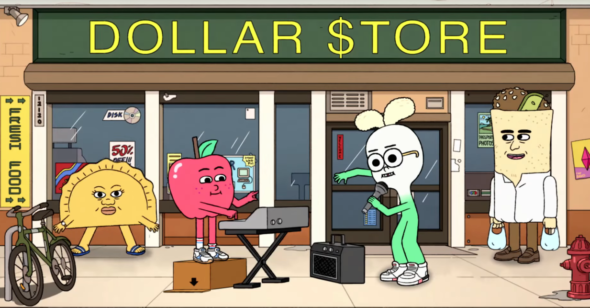 The animated comedy follows “besties Apple and Onion who have decided to leave their hometowns to experience big city living.” Apple & Onion premieres on Cartoon Network on February 23rd at 7 p.m. ET/PT.

Best friends Apple and Onion, the eponymous characters of Cartoon Network’s comedy Apple & Onion, make their debut with a special double premiere on Friday, Feb. 23 at 7 p.m. (ET/PT). The fun new series, which stems from the global Artists Program, will introduce besties Apple and Onion who have decided to leave their hometowns to experience big city living. With Apple’s uncontainable enthusiasm and Onion’s outlandish imagination, the two pals embark on hilarious misadventures, often bringing fresh and unexpected insights into today’s modern life. Apple & Onion is created by George Gendi and executive produced by Cartoon Network Studios.

With a special limited run, fans can splurge on back-to-back new episodes every Friday at 7 p.m. (ET/PT) through March 23. For those who want to get a first look, catch the first two new episodes of Apple & Onion beginning Friday, Feb. 16 on the Emmy-winning Cartoon Network App and VOD. In the debut episode “A New Life,” the series introduces how Apple and Onion meet one another for the very first time. Then, in the “The Perfect Team,” a stray cat causes Onion to worry his relationship with Apple is in jeopardy.

Born in Egypt and raised in England, Gendi found inspiration for the whimsical comedy in a children’s story written by his older brother. Like Emmy-winning, critically acclaimed mini-series Over the Garden Wall and Long Live the Royals, the Apple & Onion short was greenlit as part of Cartoon Network’s Artists Program and developed into a limited series to include a colorful zany foodiverse allowing for comedic situations featuring the two quirky friends with playful personalities and infectious musical beats to match.

Apple and Onion are new to the city and the city is new to them. They find it unfamiliar and confusing, but with an unstoppable enthusiasm they discover their own special and often insightful path through the journey called life. Joined by an eclectic lively mix of anthropomorphic food friends that include Hotdog, Lemon Drop, Pancake and countless others, the can-do and optimistic Apple and Onion encounter adventures on every avenue, take on the challenges of big city living and bring cheer and goodness to wherever they go.”

What do you think? Do you watch Cartoon Network? Will you check out Apple & Onion?