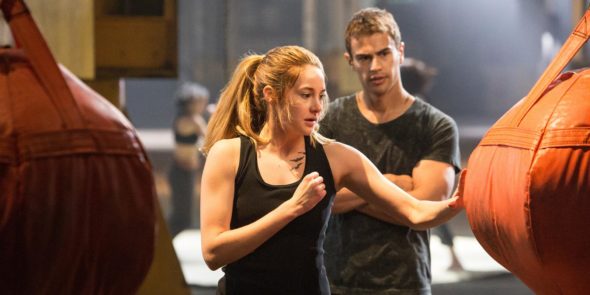 Sorry, Divergent fans. Buzzfeed reports Starz has cancelled plans to wrap up the film franchise with the TV show Ascendant.

As reported earlier, Lionsgate was developing the final part of the Divergent movie franchise as a TV series for Starz. The sci-fi drama is based on the books by Veronica Roth and stars Shailene Woodley as Beatrice Prior, a young woman who lives in a dystopian society split into factions. The cast also includes Theo James, Ashley Judd, Ray Stevenson, and Ansel Elgort.

According to Buzzfeed, Starz has ceased development on Ascendant. The network did not give a reason for the decision. However, Buzzfeed does say most of the lead actors from the films had little to no interest in returning to Divergent for the Starz TV show:

One by one, the lead actors all expressed their lack of interest in moving Divergent to television, with Woodley — who had always been passionate about playing Tris — delivering the death knell: “I didn’t sign up to be in a television show,” she told Screen Rant.”

What do you think? Are you a Divergent fan? Would you still like to see the final part of the franchise?

That’s a really funny picture 😀 Her fists are the size of my knuckles and she looks like she could bench press a cat with great effort.

Is there a way we, fans can convince Liongate to release a 4th divergent movie? Love Shailene Woodley and Theo James’ acting as a couple.

I really want to see the 4th movie!

Please find a way to release Ascendant. I thought the whole series was wonderful and well performed and produced. The ensemble cast does such a great job.

I really want to see the 4th movie!

I would love for their to be a 4th movie!! Maybe now with all the time passing between them, they could pick up where Tris woke up from what they thought was her death, or maybe they found some serum that would bring her right back and now they’re in a world that’s what they were hoping for. No more power maniacs and more equality, but still the faction system they were all comfortable with? Something! I know authors love their stars to be mourned as heroes, but let Tris live!!

In my opinion, at the end of the day it’s the right thing to happen. Movie studios got the habit to exploit the franchises by splitting the last part of them., and I consider that behaviour a disrespect to the audience. They are looking, not the quality of the franchise, but to make more money from the followers. I guess that for further franchises the studios will think twice before planning 4 movies instead of 3. For those who didn’t read the books and are dissapointed for the situation, I recommend to read them all, they will probably find the… Read more »

I think it should have a final movie

I’d like to see all three books redone as a series and actually keep to the story of the books. As much as I enjoy the first two movies by the time they had gotten to the third they had strayed too far afield to tell the rest of the story. Start from the beginning with a whole new cast.

Make the final movie, the series was left unfinished and a TV movie wouldnt do it justice. They made a tone of enough money to make it good and some people want the full story out before they watch something and thus movie definitely has a fan base so make the last one for the fans.

I totally get shailene’s reasoning for not wanting to do a tv show. That is a lot of effort and worthless. This is a movie series. I’m all for the 4th movie. Allegient left us hanging. There’s meant to be more so give us more!!! Hopefully you guys see our desires for another movie and help make it happen!!!

You need to just let it end with the last movie! Forget the tv series! I really want to see the 4th movie!

Shailene Woodley was on a tv show wtf

She signed a contract with Loinsgate to make four Divergent movies, not three movies and a TV show. That was her point. The fact that she was on Secret Life years ago is irrelevant.

Err Woodley said that well over a year ago, that part certainly isn’t new news. If they have cancelled plans for the show that’s a good thing, it’s also got nothing to do with the cast of the movies though as they all said 1-2 years ago they would unite in saying no to a tv show to end things.

that hurts.. but maybe Lionsgate just gather up and bring all the main actors together and bring that final film! It would be terrific if they don’t bring it. For the fans and for the company.
First, they got a lot of money and secondly they did not make loss on Insurgent.. “only 40millions plus” WOW that was the reason?
Cmon Lionsgate, lets get us the final part!

Loinsgate lost a lot of money on the third film, Allegiant, which is why they don’t want to make a fourth one.

The box office take decreased for each of the three films in the series:
Divergent $151 million
Insurgent $130 million
Allegiant $66 million

Clearly there is not enough fan interest to justify spending ~$100 million on production and marketing for a fourth movie.

Those are just the US box office numbers. Like many series, the US box office declined faster than the international box office. The global box office number for Allegiant was $179 million; if that held up for Ascendant, as it likely would because it would have been the second half of the story started in Allegiant, Lionsgate should have been able to break even, perhaps with modest budget cuts. (Part two of Harry Potter and the Deadly Hallows did substantially better than part one. Part two of The Hunger Games: Mockingjay did a bit worse than part one.) The opening… Read more »