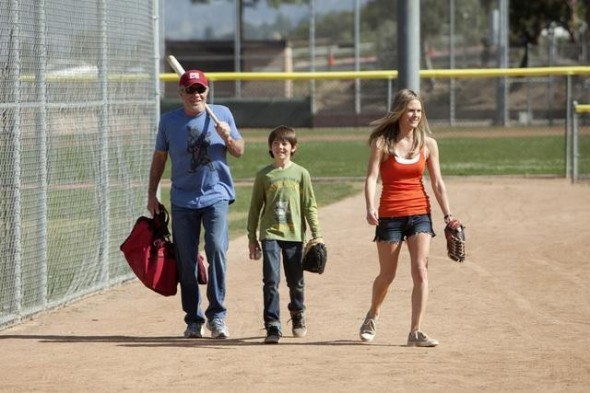 ABC has decided not to order any more episodes of Back in the Game, their Wednesday night sitcom. The network initially ordered 13 episodes and filming was completed yesterday.

Co-creator Robb Cullen broke the news about the cancellation on Twitter. He wrote, “So, ABC has decided NOT 2 move forward w @BackInTheGameTV 2 all of u fangles and friends, I can’t begin 2 thank u for all of ur support.” He later indicated that the remaining seven unaired installments are expected to be broadcast.

Airing out of The Middle, Back in the Game follows a single mother (Maggie Lawson) and her son (Griffin Gluck) who move in with her gruff father (James Caan). Despite having no experience, the boy desperately wants to play baseball so his mom, a former All Star, gets roped into coaching a new team of misfits. Others in the cast are Lenora Crichlow, Ben Koldyke, Kennedy Waite, J.J. Totah, Cooper Roth, and Brandon Salgado.

The sitcom debuted in late September to a 2.2 rating in the 18-49 demographic with 8.01 million viewers. Unfortunately, the numbers have been dwindling downward since then.

What do you think? Are you sorry to hear that Back in the Game has been cancelled? Did you enjoy the show? Will you watch the remaining episodes?

I can’t believe ABC cancelled Back in the Game. It was enjoyable and funny
James Caan was great in it. The whole premise about a single mom raising her son with grandpa was awesome. Please reconsider. There are other ABC shows that should get the boot.

Stopped watching after the son came home from school and told “James Caan”, “I kissed the bully so he would be confused by me and leave me alone . Thought it would be a wholesome show for my kids to watch. Not some propaganda for the gay agenda.

Loved the show, BRING IT BACK!

Completely agree!! My daughter & I were VERY disappointed to hear they cancelled….

I am so pissed that this show has been canceled. It was smart and witty, the actors were all spot on- super fun night? How about f@#$ing boring and lacking originality. Bring this show back!!!!!!!!

Wow I agree with the other comments. This was actually a good show. I am disappointed that it got canceled and super fun night which I watched once, did not laugh, and never watched again stayed. I was never a Maggie Lawson fan but she won me over with how she was raising her son with good morals and to be a good young man despite all of the other influences. They won my heart with this one. And Maggie was awesome in this role. I’m a fan now!

I loved it I thought it was very funny and raw I hope to see it on again.

So, let me get this straight…The Neighbors rates far below Back in the Game, bleeds 1/2 it’s audience in one season, and stays on the air while the actual GOOD show gets cancelled? Give me a break.

Of course it’s cancelled! It was almost as funny as Modern Family! All the good shows get cancelled and all the reality shows go on and on forever. Disappointed 🙁

Cancelled Back in the Game, kept Super Fun Night and the Goldbergs? No wonder ABC is on the BOTTOM of the ratings.

Shame on you for cancelling back in the game, tired of you keeping all the reality crap that’s on anymore.

I am STILL waiting to hear/read something about when the remaining 3 eps are supposed to air! and there are 3 left because they’ve only aired 10 according to TV Guide, not 2 left like this site seems to think.

I understand why a lot of people who watched the first episode did not tune in again. The first episode was more about sex than little league baseball. The previews were misleading. I thought this would be a good show to watch with my son who loves to play baseball, but it wasn’t really appropriate. Still I watched the remaining episodes and it grew on me.

I AGREE WITH ALMOST ALL COMMENT ABOUT “bACK iN THE gAME”.IT’S A GPPF & FUNNY FAMILY SHOW.lOVE JANES CAAN. tHEY TAKE OFF THE gOLDBERGS THEY ARE MORONES
bRING BACK—-GOOD SHOWS AND THE B AD ONES STAYS,COLLEEN