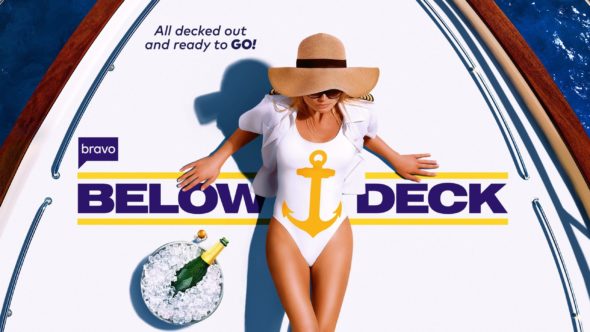 The Below Deck franchise is not going anywhere anytime soon. Bravo and Peacock have ordered new seasons of Below Deck: Mediterranean (season eight), Below Deck: Sailing Yacht (season four), and Below Deck: Down Under (season two). New episodes of those reality shows will arrive in 2023.

As for the original series, Below Deck will return in November for its 10th season. The series follows Captain Lee Rosbach, Chef Rachel Hargrove, Chief Stew Fraser Olender, and the rest of the crew as they sail a superyacht through the Caribbean during charter season. Bravo revealed more about the return of the Below Deck franchise in a press release.

New Seasons of Emmy® Award-Nominated “Below Deck Mediterranean,” Along With “Below Deck Sailing Yacht” and Peacock’s “Below Deck Down Under” to Premiere in 2023

Bravo has picked up Emmy®-nominated “Below Deck Mediterranean” for an eighth season; “Below Deck Sailing Yacht” for a fourth season; and Peacock has renewed “Below Deck Down Under” for a second season. All are set to air next year.

COMING UP ON SEASON 10 OF “BELOW DECK”

Check out a preview for Below Deck season 10 below.

What do you think? Are you excited to see new episodes of this reality series? Do you enjoy shows in the Below Deck franchise?