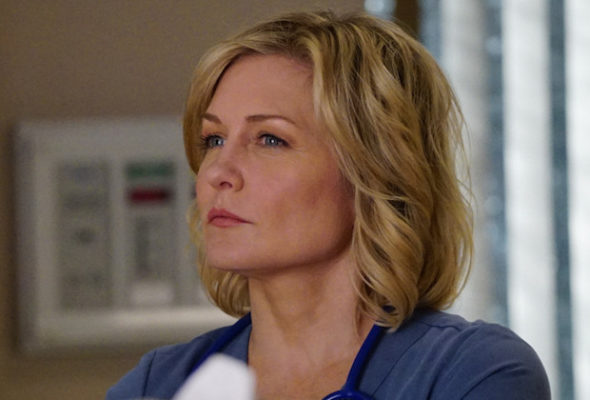 What happened with Linda? Recently, Amy Carlson spoke with Deadline about her shocking exit from CBS’ Blue Bloods.

When Blue Bloods premiered its eighth season in September, it was revealed that Linda (Carlson) had died in a helicopter crash. The character death prompted a vocal reaction from fans, who were shocked by the clumsy way the writers handled Carlson’s exit from the show.

Now, Carlson has spoken out about the decision to leave and how it was handled. In the interview, she revealed she was touched by the outpouring of fan support after her character was killed off:

I was surprised, but I’m also just so honored that all these fans connected so much with that character. It surprised me, but it really touches my heart that they cared so much about Linda and that she meant so much to so many people, I had no idea, I can’t even tell you how many messages a day I get about her and the character. They’re so sweet, they all wish me well in my future projects, they’re all just super supportive fans of mine, and it’s just so lovely.”

And how did Carlson feel about the way Linda’s death was handled?:

I feel badly that she dies the way she dies. I did not know they would do that, I was surprised. I wouldn’t have done that.”

Later, Carlson revealed she would return to the CBS series, if only for some closure:

Yeah, I think it’s been hard on the fans. I never wanted it to end that way, so I feel sad for the fans because everyone wants closure, and I hear that a lot from the fans. So of course I’d be open to that. Sure.”

What do you think? Do you watch Blue Bloods? How do you feel about Linda’s death?

Blue Bloods is a series that is well written, and performed by seriously talented actors. It is rare because it holds up a family of moral prayerful Catholics who are shown saying grace at dinner. In the vile secular world of TV that small display is about the most they dare show of people with faith. The Police are shown realistically, and not denigrated, another rarity in this day and age. It deserves to be renewed.

Her role has stability and is real. Why take off the one person that held her family together.

I did not like it when she left. I think they could have given us more episodes on her death. Perhaps an illness rather than a tragic event

I don’t watch Blue Bloods as much as before because of the sudden loss of Linda. She was one of my favorite characters. Fans were definitely cheated.

I hated the way it was handled. I want her back so bad, she was a big part of the family and missed so much. In TV there are ways you could get around her death and bring her back. She could of been throwned from the Helicopter and has amnesia, and someone had been taking care of her. Please bring her back!

Very confused initially, the start of the season was poorly done. We didn’t understand what was happening at all!! We were very upset with the loss of Linda & her character. She is a major part of the show & a major player. She was such a solid part of the family, a rock that helped to hold them all together, both her family & for the whole Reghan family. Both my husband & I love this show & would be REALLY disappointed if the show didn’t continue.

I’m sorry Amy left the show. I liked the way Linda and Danny portrayed a “normal marriage”, with the tensions, conflicts, etc, that are part of real life. They portrayed and loving, supportive family, not perfect, but realistic. Any time a popular character leaves, it’s normal to miss them. However, I think the writers did well to portray the loss again, in a realistic way. The family mourns for, and misses Linda, but life goes on, and each family member handles the loss in a different way. I thought it was a realistic reflection of coping with such a loss.… Read more »

Should not have written her out !!! You need consistency, A family needs all the people to play their part. It’s a Family show. I morne her loss.

There’s a hole in my heart,there’s something missing on the show now.
Wish they would have handled Linda’s leaving a little bit better,if Roseanne’s Dan can come back to life so can Danny’s Linda!

The way CBS and the writers handled Linda’s “demise” was bogus. Now there is a disconnect around the Reagan table; I don’t like it as much now, feel cheated. The writers need to come up with a plot line where she comes back to bring balance back to the family.

I’m so sorry to see Linda out of the show. She was the buffer for Danny, and all of the Reagans loved her. Trying to bring her back isn’t realistic and most of BB’s shows ARE very realistic. Skip that idea, and if show continues for a couple of more seasons, introduce a love interest for Danny. Kids need a Mom too. I never miss a show and record every re-run possible.

It was hard to understand exactly what happened. Why was she on a helicopter? After losing their house at the end of S7, to have Linda gone at the start of S8 was like a very bad punch in the stomach. As to bringing her back, that might be in more confusing than how they wrote her out. Please don’t do any “memory” programs, those are generally poorly written and never believable. As for taking out of the prayer before dinner, that’s just pure dumb. Throughout this show’s life, the dinner scene including the prayer by this Irish Catholic family… Read more »

My Wife and I love Blue Bloods

I was shocked to learn that she would not return. She was a strong character on the show. I would love for them to findsd a way to bring her back

Linda Reagan was the meat and most logical person on the show. This may determine if I will continue to look at Blue Blood. They need to come up with a way to bring her back.