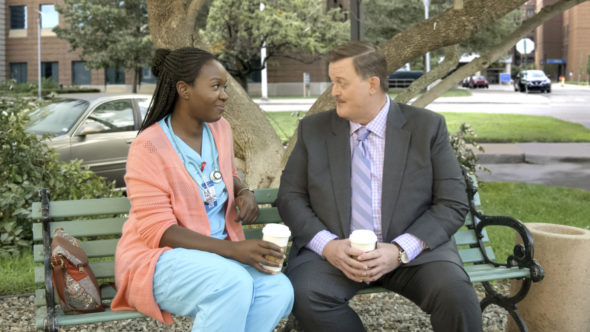 Bob and Abishola’s relationship will continue in the 2021-22 television season. CBS has renewed the Bob ♥ Abishola TV series for a third year.

A romantic comedy series, Bob ♥ Abishola (read as “Bob Hearts Abishola”) stars Billy Gardell, Folake Olowofoyeku, Christine Ebersole, Matt Jones, Maribeth Monroe, Vernee Watson, Shola Adewusi, Barry Shabaka Henley, Travis Wolfe Jr, Gina Yashere, Bayo Akinfemi, and Anthony Okungbowa. Bob (Gardell) owns a very successful compression sock factory in Detroit and runs the business with his mother (Ebersole), his sister (Monroe), and his younger brother (Jones). The stress of the job lands Bob in the hospital with a heart attack and he falls in love with his cardiac nurse named Abishola (Olowofoyeku), an immigrant from Nigeria. She came to America with her young son (Wolf Jr.) and they live with her Auntie Olu (Adewusi) and Uncle Tunde (Henley). Despite their very different backgrounds and her initial lack of interest, Bob is determined to win Abishola’s heart.

What do you think? Do you enjoy the Bob ♥ Abishola comedy series? Are you looking forward to watching the third season on CBS?

Since the show is about Bob and Abishola, would like to actually see them. Tonight they were actually in less than two minutes of the show which was all about Kemi and Bob’s sister.

I love Bob Love Abilosha and The Neighborhood! And I hope the continued for many seasons to come.

I cannot wait for the 3rd season.

Love this show and hope it continues. Interaction of the characters is light and enjoyable. They preempted several times for basketball and that crap. Don’t let them do that!

Should be expanded to 1 hour. Half an hour is not enough!

I cannot for the life of me understand why “Bob Loves Abishola” (BLA),is Renewed for season 3 and “MacGyver” is cancelled. BLA is predictable and trite. It is the same old boy loves girl and girl makes fun of boy….seen it a million times. I find some of the situations inappropriate for children to view. “MacGyver” was a fun spy like escape for the entire family. I’m not asking for “MacGyver” to replace BLA, but find space for “MacGyver to air, even Saturday night would be fine.
.⭐️⭐️RENEW “MACGYVER”⭐️⭐️

Love this show was disappointed that basketball was on instead