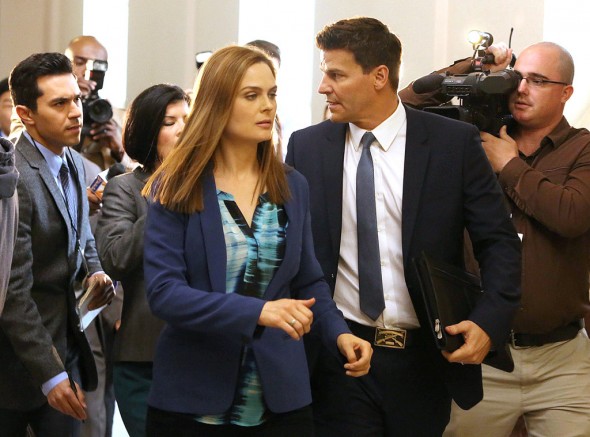 Despite a ratings dip, Bones was not cancelled after season 10. FOX renewed Bones for season 11. Now, E! is breaking news that star David Boreanaz (Angel) is looking forward to a series wrap, at least for his character, Booth. There has been no response yet, from Brennan’s alter-ego, co-star Emily Deschanel (Providence). Bones season 11 premieres tonight on FOX. Is this the beginning of the end?

…if Boreanaz has his way, the 11th season of Bones will be the last. “For me, personally, I think it’s time. I think that 11 seasons is great,” he explained. “I mean, one season is great! I don’t really count it as seasons but what we’ve given to the show and what we can do, for me it’s great to see the show come to an end and do it the way we want to do it.”

It does make sense that the show could be taking a victory lap of sorts. It’s been around for more than 10 years, and has performed well in nearly as many time slots. But there’s only so long it can go on. So when asked to clarify if yes, this truly is the end of the road for Booth and Brennan, Boreanaz confirmed: “For me it’s a yes.”

What do you think? Are you tuning in for tonight’s season premiere? Do you think Bones could continue without Boreanaz?

BONES IS THE BEST SHOW ON T.V. I WOULD LIKE TO KNOW WHERE I COULD GET SEASON 11 DVD. PLEASE DO NOT MAKE THIS THE LAST SEASON, I DON’T WANT IT TO EVER END….

It’s one of the few shows left that is real television… Not the game shows and singing shows and dancing shows… Just enjoyable TV and there is always a new story line becuase let’s face it crime and murder are always around… I will be so mad if booth leaves or if the show is cancelled!!! Whats left for people to watch as real television anymore! No No… Bones can’t Go!!!

I will be very, very sad to see Bones end. It’s my favorite show by far. But personally, to me, Booth is the main character, so if David Boreanaz leaves, I probably would not watch after that. PLEASE don’t kill him. Give him a promotion, like head of an FBI station somewhere nice, or have them start a husband-and-wife PI business, but if he dies, that would be devastating.

when does the next new eposide come on

I’ve watched boreanaz on Buffy, on Angel and now on Bones. When he left Buffy, I boycotted the show for years. I refused to watch it without him. And I feel similarly about him departing Bones. If he leaves the show he is breaking up the most inspiring, relatable couple I’ve ever had the pleasure to watch. The characters of Bones have become like friends, with Brennan and Booth the epicenter. This show has inspired me in so many ways. The plot, the drama, the laughter and most of all the love story. It wouldn’t be the same, and without… Read more »

I would hate to see booth go! Really love the character. But yes I would see how it went

If Boreanaz leaves, a lot of fans are going too, I’m for all of the actors, but without Booth, it wouldn’t be the same… I mean who wasn’t upset when he “disappeared” in one of the most recent season’s episode?? Just imagine what will happen if he leaves all together…

Whey does Booth want to end Bones it has
been on for so long besides that everybody
love the show.