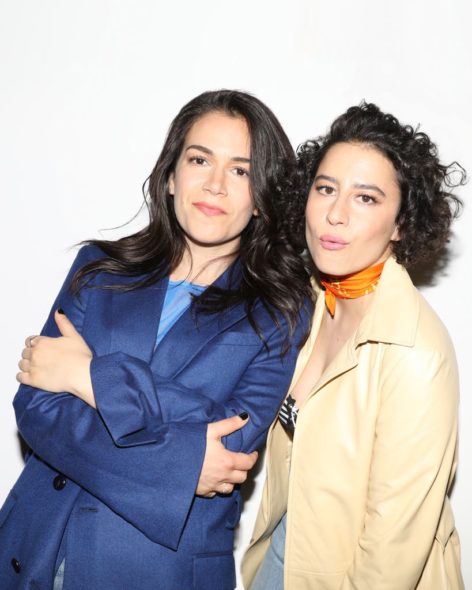 It’s the beginning of the end for Abbi and Ilana. Comedy Central has announced the fifth and final season of the Broad City TV show will premiere on a date TBD in early 2019, leaving the show essentially cancelled. The news isn’t grim, though. While there will be no season six of Broad City, the basic cable network has struck a new “first look” deal with creators and stars, Ilana Glazer and Abbi Jacobson.

FIFTH AND FINAL SEASON OF BROAD CITY PREMIERES IN EARLY 2019

NEW YORK, April 12, 2018 – Comedy Central today announced a comprehensive development deal with Ilana Glazer and Abbi Jacobson with a ‘first look’ at content created and/or developed for television by Glazer and Jacobson, both together and independently. The deal with the multitalented creators, stars, directors and showrunners of the hit series Broad City, which will return for its fifth and final season in early 2019, also extends across all of parent company Viacom’s television networks. Three projects already in development at Comedy Central under the new deal include Mall Town USA, Platinum Status, and Young Professionals.

“Broad City’s Abbi and Ilana may appear to be aimless and full of hair-brained schemes, but Abbi and Ilana IRL have proven to be stellar creator/writer/performer/director/producers. Their supreme focus on telling new stories, in new worlds, with new talent is nearly scary,” said Kent Alterman, President of Comedy Central.

“Broad City has been our baby and first love for almost ten years, since we started as a web series. It’s been a phenomenal experience, and we’ve put ourselves into it completely. Broad City’s always had a spontaneous pace and feeling, and ending after season five honors that spirit. We are very excited to bring new voices and points of view to Comedy Central and continue our collaboration together in new ways,” said Glazer and Jacobson.

Glazer and Jacobson have earned universal praise from fans and critics alike thanks to their dynamic relationship which, combined with impeccable comedic timing and chemistry, has led the series for which they are best known, Broad City, to such accolades as a 2016 Writers Guild Award nomination for “Best Comedy Series,” multiple nominations for “Best Comedy Series” by the Broadcast Television Journalists Association and back-to-back Emmy® Award nominations for “Outstanding Short Form Comedy Or Drama Series” for their digital offshoot, Hack into Broad City. Created by, written by, executive produced by and starring Glazer and Jacobson, Broad City follows best friends, Abbi and Ilana, as they navigate life in New York, capturing their hookups, relationships, crappy jobs and, ultimately, their badass friendship.

In addition to her work on Broad City, for which she received a Critics Choice Television Award nomination for “Best Actress in a Comedy Series,” Ilana Glazer last year starred on the big screen opposite Scarlett Johansson in Sony Pictures’ comedy, Rough Night, directed by Lucia Aniello. Glazer was also seen in the film The Night Before opposite Seth Rogan and Joseph Gordon-Levitt and, along with Ellen DeGeneres and Jeff Kleeman, is executive producing the upcoming Warner Bros. and BuzzFeed motion picture Brother Orange starring Jim Parsons. This past fall, Glazer and 2 Dope Queens star Phoebe Robinson toured across North America for their ‘YQY’ (Yaaas Queen Yaaas) tour and will bring the show back to New York for additional performances later this year. Glazer trained at the Upright Citizens Brigade Theater where she and Jacobson met.

Abbi Jacobson’s most-recent film, the Netflix Original 6 Balloons in which she stars alongside Dave Franco, premiered at this year’s SXSW film festival and will begin streaming on Netflix on April 6. Jacobson voiced “Nya” in the animated Warner Bros. film, The LEGO Ninjago Movie, opposite Olivia Munn, Justin Theroux, Dave Franco, Jackie Chan and Fred Armisen, and also appeared in the Dustin Guy Defa directed film, Person to Person, opposite Michael Cera and Michaela Watkins, and Universal’s Neighbors 2: Sorority Rising. Additionally, Jacobson will give voice to “Bean” in the Netflix series Disenchantment, a new epic fantasy animated series from Matt Groening set to release in 2018.

Off screen, Jacobson hosts A Piece of Work podcast with WNYC and MoMA, in which she discusses modern and contemporary art in lively conversations with curators, artists, and friends including Hannibal Buress, Tavi Gevinson, RuPaul and Questlove, and in October will be releasing a new book,
I Might Regret This (Grand Central Publishing). She is already an AOLArtist and New York Times-bestselling author and illustrator of Carry This Book, which showcases bright, quirky, and colorful line drawings at the world around us, all through the framework of what we carry. She also has two coloring books: Color This Book: New York City and Color This Book: San Francisco. Jacobson trained at the Upright Citizens Brigade Theater where she and Glazer met.

What do you think? Are you a fan of the Broad City TV series? Is this Comedy Central TV show ending at the right time? If it were up to you, would Broad City be cancelled or renewed for season six?