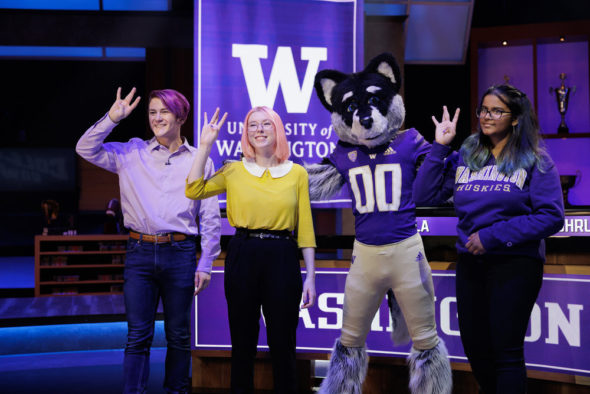 Some people seem to have all the answers. Has the Capital One College Bowl TV show been cancelled or renewed for a third season on NBC? The television vulture is watching all the latest cancellation and renewal news, so this page is the place to track the status of Capital One College Bowl, season three. Bookmark it, or subscribe for the latest updates. Remember, the television vulture is watching your shows. Are you?

Airing on the NBC television network, the Capital One College Bowl TV show is hosted by former NFL quarterback Peyton Manning, with his brother Cooper Manning serving as a sidekick. The series challenges college students out of the classroom and puts their knowledge to the test as they compete for academic scholarships. In each episode, teams of three represent some of the nation’s top schools and battle it out in a bracketed tournament over four rounds. Teams must work together to answer questions on a wide variety of subjects. The top two schools advance to the final portion of the game where they compete head-to-head for the Capital One College Bowl trophy and a scholarship to put toward their education. Capital One will award $1 million in scholarships, providing all student competitors from the above institutions with tuition assistance for their participation.

The second season of Capital One College Bowl averages a 0.24 rating in the 18-49 demographic and 1.75 million viewers in the live+same day ratings (includes all DVR playback through 3:00 AM). Compared to season one, that’s down by 38% in the demo and down by 28% in viewership. While these numbers don’t include further delayed or streaming viewing, they are a very good indicator of how a show is performing, especially when compared to others on the same channel. Though other economic factors are involved, the higher-rated shows usually get renewed and the lower-rated ones get cancelled. Find out how Capital One College Bowl stacks up against other NBC TV shows.

What do you think? Do you hope that the Capital One College Bowl TV show will be renewed for a third season? How would you feel if NBC cancelled this TV series, instead?