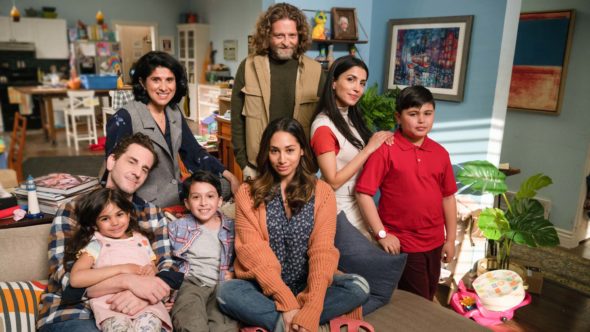 Children Ruin Everything is premiering on The Roku Channel in May and the streaming service has already renewed the series for a second season. Starring Meaghan Rath, Aaron Abrams, Ennis Esmer, Nazneen Contractor, Logan Nicholson, Mikayla Swami, Nathan, Dmitry Chepovetsky, Veena Sood, Lisa Codrington, and Darius Rota, the comedy series follows a couple as they deal with the ups and downs of raising their two young children.

In a press release, The Roku Channel revealed more about the series and its renewal.

“Roku, Inc. (NASDAQ: ROKU) today announced that season one of Roku Original comedy Children Ruin Everything will debut on The Roku Channel in the U.S. on Friday, May 13. Roku has also picked up season two of the series, which will feature double the episodes of season one, at an increased 16, half-hour episode season. Production for season two is to begin this Spring in Toronto and Hamilton, Ontario.

Created by Golden Globe(R) and Emmy(R) Award-winner Kurt Smeaton (Schitt’s Creek), Children Ruin Everything is about living with the worst roommates of all: young children. Astrid (Meaghan Rath) and James (Aaron Abrams) struggle to find a balance between being ‘Mom and Dad’ to two kids and being who they were before offspring. Children Ruin Everything explores the hilarious and varied ways kids can tear down your life and, if you’re lucky, replace it with something you have to admit is pretty okay, too.

Colin Davis, Head of Scripted Originals, Roku: “It’s finally here! Kurt Smeaton, Chuck Tatham and Mark Montefiore have brought us a heart filled comedy with Children Ruin Everything. This story is universal, endearing and audiences will instantly relate with these characters. As the momentum driving Roku Originals continues, it is beyond exciting not only to share season one with audiences, but to also have the opportunity bring it back for a supersized season two on The Roku Channel.”

Children Ruin Everything is produced and developed by New Metric Media in association with CTV, with the participation of the Canada Media Fund. Bell Media Distribution is the international rights holder for “Children Ruin Everything”, and New Metric Media is the series’ exclusive International Sales Agent. While airing in Canada, the series was CTV’s #1 new comedy of the 2021-22 broadcast season, and ranked as the biggest debut episode for a Canadian comedy among A25-54 since 2019*.

Kurt Smeaton, Creator, Children Ruin Everything: “We have no doubt that audiences on The Roku Channel will immediately connect with Astrid and James as they navigate the hilarious and surprising ways that having kids changes your life. We can’t wait to finally share the series with American audiences and look forward to bringing the talented cast back for more fun and chaos in season two.”

Check out the trailer for Children Ruin Everything below.

What do you think? Are you excited to see this comedy on The Roku Channel next month?