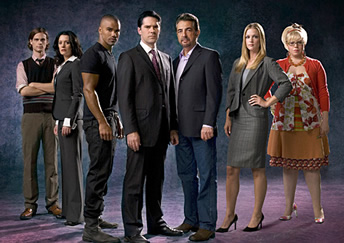 Supervisory Special Agent Elle Greenaway (Lola Glaudini) was assigned to the BAU as an expert in sexual offense crimes. Her father was a cop who was killed in the line of duy and she is half Cuban and speaks Spanish fluently. She suffers extreme emotional trauma after being shot by a psychotic and who writes on a wall with her blood. After a brief return, Greenway hands in her badge.

Series Finale:
Episode #324 — And in the End
Following an explosive face-to-face encounter with Everett Lynch, a.k.a. “The Chameleon,” Dr. Reid suffers from a brain injury and, while experiencing hallucinations, is visited by ghosts from his past. Also, the BAU makes a shocking discovery about Lynch that affects Rossi personally, and the entire BAU team comes together to celebrate Rossi’s retirement.
First aired: February 19, 2020.

What do you think? Do you like the Criminal Minds TV show? Do you think it should have ended or been renewed for a 16th season?

This one of the best shows on TV. I will hate to see it end.

Criminal Minds is one of the BEST SHOWS ON TV!
Why is it being cancelled?
There are lots of other stupid shows that should be removed
Not Criminal Minds

We LOVE Criminal Minds !!!!! I hate that it is ending. I have watched every season since the start. I have watched re-runs because I cannot get enough. It is the best show on TV right now !!! PLEASE reconsider ending my favorite show !!!

I first accidentally found out about the show through reruns on the A&E channel several years ago. I couldn’t believe I had never seen or heard about it. I got hooked and also began watching all the new episodes on CBS. I’ve been all caught up for quite some time now. I do have to admit though, I began to not enjoy the series quite as much beginning maybe two or three years ago. I’m not all that upset it won’t be renewed. I did thoroughly enjoy it for many years but truly believe it’s time has finally come. It’s… Read more »

Please keep criminal mind’s on this is a great show. And keep the cast just as it is. They work well together. I can’t understand why the writers and the others that have a part in creating this wonderful show. Would let it slip away like this. Please consider my request and keep it on the air. Thank you for your time. Nancy.

I love love this show !!! I constantly rewatch this show and think it’s one of the best ever made I would love to see it continue but like All good shows they eventually have to end especially if too many main characters are replaced.

I’m torn, I think it’s a great show but if it has to end, going out on top is a good way to go. I too have watched it since the beginning; if it can be saved, I would love to continue to be a loyal fan.

I have watched Criminal Minds since the beginning. It is a good show, but I think having a final season is a good idea. Time for it to go out in style!

I have enjoyed this show since it’s beginning ! One of the best shows on TV. Please don’t bring it to an end !

Criminal Minds is the best show on TV, it’s been on forever and I haven’t missed a single episode. Why would you want to cancel a show that does so well? Please renew it, so many loyal fans would be disappointed to see it cancelled. There is nothing else quite like it!