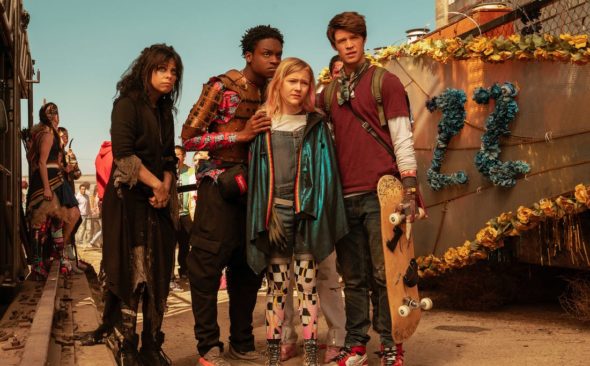 TV show description:
A dark comedy series, the Daybreak TV show is based on the graphic novel by Brian Ralph. The series follows a 17-year-old high school outcast who’s searching for his missing girlfriend in a post-apocalyptic Glendale, California. In his search, the teen is joined by a ragtag group of misfits. The group tries to stay alive amongst the horde of gangs of evil jocks and cheerleaders turned Amazon warriors, zombie-like creatures called Ghoulies, and everything else this brave new world throws at them.

Josh Wheeler (Ford) is an ordinary kid who learns he’s not so ordinary after all when the bombs drop. The apocalypse is the best thing that ever happened to him as he can finally be the hero he read about in comic books. Josh’s search for his lost love, Sam, leads him to become a reluctant leader of an ad hoc tribe of outliers.

Samaira “Sam” Dean (Simnett) is outgoing and well-liked by everyone she meets — particularly Josh, who is smitten with her at first sight. Their budding romance is nuked (literally) when atomic bombs decimate civilization.

Wesley Fists (Crute) is a high school football star with movie star good looks and a penchant for swords. He was part of a system that terrorized less popular students (like Josh). But, when Josh and Wesley meet once again in the apocalypse, Wesley is trying to follow the path of Eastern enlightenment and non-violence.

Angelica (Lind) is a precocious, abrasive pyromaniac who Josh accidentally saves from a bloodthirsty gang. She begs Josh and Wesley to let her team up with them, and her flair for making Molotov cocktails starts to come in very handy.

Eli Cardashyan (Kasyan) was one of the have-nots in high school but, in the apocalypse, he’s barricaded himself inside the mall and now he has everything he could possibly want.

Turbo Bro Jock (Kearsley) is a fierce, handsome football player who has assembled all the athletic teen teams of Glendale into one, big, murderous crew, and he’s the team captain. When Josh and his tiny gang outsmart his peeps, decimating their ranks, Turbo is determined to track his adversaries down and do his worst. Turbo’s closest consigliere is Mona Lisa (Godlock), a tough female athlete who got her nickname because she never smiles.

Ms. Crumble (Rodriguez) was once the high school biology teacher and is one of the only adults to have survived the bomb. Something’s very wrong with her brain which is fascinating to Angelica.

Principal Burr (Broderick) is the cheerful, upbeat principal of Glendale High and knows the name of every kid in school and their favorite character to play in Overwatch. Burr is genuinely a good guy, an advocate, and ally for all. Unfortunately, kids can really be monsters.

Series Finale:
Episode #10 — FWASH-BOOOOOOOOOOOOOOOOOOOOOOOOOM!
Can Principal Burr be defeated? Are Josh and Sam truly meant to be? And what exactly is Crumble, anyway? It’s epic conclusion time.
First aired: October 24, 2019.

What do you think? Do you like the Daybreak TV show on Netflix? Do you think it should have been cancelled or renewed for a second season?

This was very good show and I loved it. It was such a cliff hanger. And you just left it. I would love to see this show get renewed.