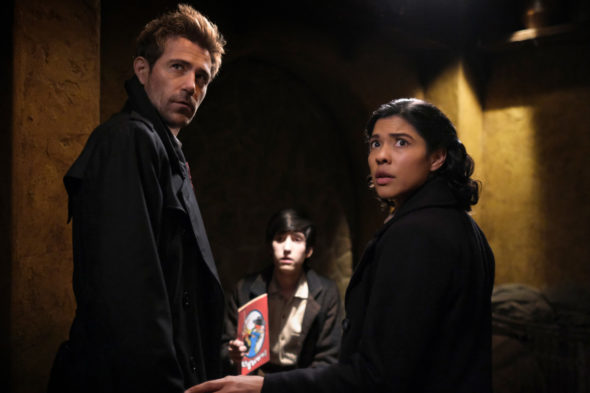 DC’s Legends of Tomorrow is still airing its sixth season, but there are some big changes coming to the series when it returns for season seven later this fall.

The biggest change is the departure of John Constantine. The character will exit at the end of this season, but actor Matt Ryan is not going anywhere. He will play a new character who connects to the Legends.

Another big change is coming for Gideon. She will become “more real” during season seven. Viewers will see her take human form, played by Amy Louise Pemberton. The actress has provided the voice of the Waverider ship’s AI on the series during its six seasons and has taken physical form at various times.

The CW revealed more about what is to come in a press release.

Series star Caity Lotz introduced the panel with a sneak peek at a trailer which featured an exclusive look at the remainder of the show’s sixth season – think bowling, board games, aliens, weddings, magic mushrooms, and a whole lot of dark drama involving John Constantine.

In the midst of all the joking and fun, there were, naturally, a few “legendary” reveals:

· First up: Matt Ryan and John Constantine. Phil Klemmer revealed that “while John Constantine’s arc on the show is coming to an end in season six, Matt Ryan’s journey with the Legends is not over.” In season seven, Ryan will be back as a series regular, and he will play a new original role: Dr. Gwyn Davies, an eccentric scientist from the early 20th century who might be the team’s only hope next season.

· Matt Ryan said: “As everyone who loves him knows, in the end, John Constantine will walk his path alone. The time has come for John to part ways with the Legends, and for me to part ways with John. I’m really excited to be creating this new role on the show and having some fun with it – discovering how this new character fits in and causes some trouble for the Legends.”

· Also, joining the Legends in season seven will be Amy Louise Pemberton, who has voiced Gideon, the Waverider’s AI, for all six seasons as a series regular. Pemberton has appeared as the AI’s physical form a handful of times, but she will now portray a flesh-and-blood version of Gideon in the real world.

· Lastly, Legends fans will now have the opportunity to immerse themselves even further into the series’ musical craziness with a 21-track “Mixtape” of the show’s most memorable musical moments. Whether it’s the David Bowie-inspired “Space Girl” from the current season, or Brandon Routh’s “Mr. Parker’s Cul-De-Sac” from season five, or any of the cast performances of “Puppets of Tomorrow,” “I Surrender,” or “Sweet Baby James,” fans can find their favorites on the “DC’s Legends of Tomorrow: The Mixtape (Songs from the Original Television Soundtrack).” Available on Spotify, iTunes, YouTube, Amazon, and more, the album will be released on August 20, 2021.”

Check out a preview for what is ahead on DC’s Legends of Tomorrow below.

What do you think? Are you excited about the changes coming to DC’s Legends of Tomorrow on The CW?

I continue to watch because of Mick and John.

The show has been going downhill for a few seasons. And the new Constatine character name sounds familiar…
Ahhh, it is very similar to the person who played Nick Knight in the Forever Knight Vampire series from many years ago.

John Constantine is the only one keeping this show alive for the last three seasons. The episode from a couple weeks back that didn’t have him in it was really pathetic. If that’s any indication of where the show is going, it’s not going to be around much longer. CW really should have picked up the original Constantine series the minute NBC cancelled it. Ironically, you can stream it all from their website, and he’s on Legends, so clearly they own the rights. Maybe the better option here is just reboot that show, and let this revolving merry-go-round of a… Read more »

This show has become a joke.

That’s the point of it.