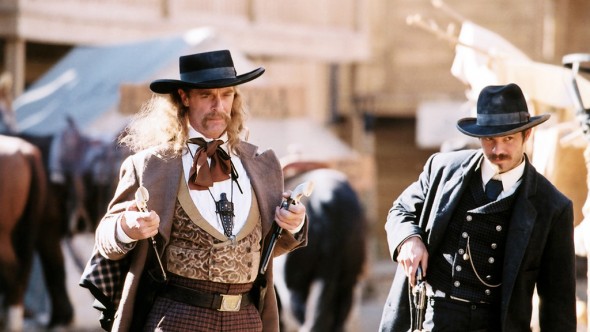 Deadwood is returning! TVLine reports that the cancelled HBO series will come back as a movie.

Deadwood ended in 2006 after three seasons.

David has our commitment that we are going to do it. He pitched what he thought generally the storyline would be — and knowing David, that could change. But it’s going to happen.”

Milch created Deadwood in 2004. Set in the 1870s South Dakota frontier, the series starred Timothy Olyphant as Seth Bullock, a former sheriff who moves to the territory to set up a hardware store. There, he encounters both fictional and real-life figures of the wild west like brothel owner Al Swearengen (Ian McShane) and Wild Bill Hickok (Keith Carradine).

Though there are no concrete plans at present, Lombardo said Milch is “confident” he’ll be able to bring back all the original cast members:

The cast is unbelievably [tight]. Some casts and creators form a bond that becomes relevant for the rest of their lives. This was a defining moment for a lot of them.”

What do you think? Were you a fan of Deadwood? Would you watch the film?

I can NOT understand WHY the BEST F*#@ing SERIES EVER ended the way it did.
I have watched the entire thing over and over on DVDs because…you simply can not get enough of these characters, the acting was SUPURB, the Writing BRILLIANT!.
I cancelled HBO because of this, I WOULD get it back IF they would BRING BACK DEADWOOD! A movie would be AWESOME…but MILCH needs a steady job to regain his losses at the track. WE WANT DEADWOOD!

Please finish out the series instead of writing additional story lines and plots!! New fans are watching it for the first time on demand and would rather have the story finish after having the last season end so unsatisfyingly (notice that’s not unsatisfactory but unsatisfying!). The last episode was a big let down even for just a season ender. It didn’t end as a cliff hanger. Rather it seemed to be a big let up to only end in a big bummer and let down of all the characters and their personalities and story line.

A truly great series. One that deserves a proper ending. The movie idea would be fantastic.

Great series. Was so disappointed it was cancelled.. Bring on he movie!

Love Deadwood, looking for the Movie. Found it while searching for more of Timothy Olyphant after his JUSTIFIED series. Such a fan of Timothy O.

Just discoverted DEADWOOD and watch all three seasons. Was this show ahead of it’s time. F__k, and all the words to go with them. Great writers and acting was superb. Calamity was terriffic……….. How I ever missed it ten years ago. AHEAD OF IT’S TIME & GREAT…………

I love the show! Hope it can be made into a movie

I love the series. Hope they can make the movie with the same actors.

I hope, hope, hope this come to be. They needed to tie this up and the final episodes did not do it. I’ve watched it several times on demand. I loved it.

Absolutely I would watch!! I was so disappointed that it did not return….I am excited about this!!!