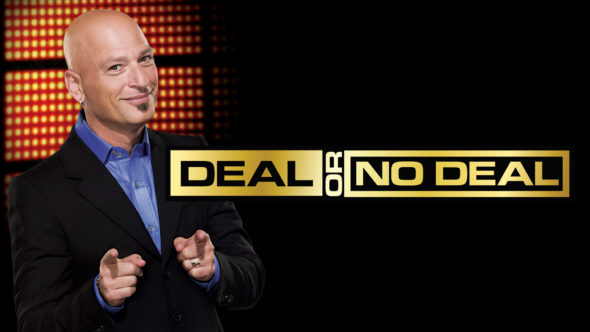 Bust out your briefcase. This week, CNBC announced they are rebooting the cancelled NBC series Deal or No Deal.

Hosted by Howie Mandel, the game show follows contestants as they “play and deal for a top prize of $1 million. With 26 sealed briefcases full of varying amounts of cash – ranging from a penny to $1 million ─ and the mysterious entity known only as “the Banker,” contestants are faced with a game of odds and chance and whether to accept an offer of cash from “the Banker” in exchange for what might be contained in the contestant’s chosen briefcase.”

NBC cancelled Deal or No Deal in 2010 after four seasons on the network and two in syndication. CNBC‘s reboot will feature the return of Howie Mandel as host and is expected to debut in late 2018.

ENGLEWOOD CLIFFS, N.J. — March 13, 2018 — CNBC today announced the network has greenlit one of America’s most popular and beloved game shows, “Deal or No Deal,” with its iconic host Howie Mandel. The reimagined “Deal or No Deal” will feature all the high energy and risk-reward that captivated audiences, with some exciting new twists. Produced for CNBC by Emmy-winning Production Company Truly Original, a subsidiary of Endemol Shine North America, the new “Deal or No Deal” will join CNBC’s primetime lineup in fourth quarter 2018. The announcement was made today by CNBC Chairman Mark Hoffman.

“Our primetime programs, with their focus on business and money, strive to be both entertaining and instructive. Shows like ‘The Profit’ and ‘Shark Tank’ are built around high stakes and high rewards. Those same elements live at the heart of ‘Deal or No Deal,’ which is why we believe it to be a perfect fit,” said Hoffman. “Today’s announcement confirms our deep commitment to primetime, strengthening our line-up, by adding one of the most successful game shows of all time along with the popular, original host, Howie Mandel.”

“Having been in this business for 40 years, I’ve been involved in every kind of production – live, variety, drama, film and animation. Nothing changed my life, career and perception of humanity more than one project, and that was ‘Deal or No Deal,’” said Mandel. “I am excited to re-embark on the most thrilling, life-changing show with the brilliant Scott St. John and our new partners at CNBC. For me, there was only one answer to that iconic question and I am proud to have said DEAL!”

On the hit game show “Deal or No Deal,” contestants play and deal for a top prize of $1 million. With 26 sealed briefcases full of varying amounts of cash – ranging from a penny to $1 million ─ and the mysterious entity known only as “the Banker,” contestants are faced with a game of odds and chance and whether to accept an offer of cash from “the Banker” in exchange for what might be contained in the contestant’s chosen briefcase.

CNBC in primetime is the fastest growing cable entertainment network among persons 25-54 since its launch in 2013. By day, CNBC is the recognized world leader in business news. By night, CNBC is an entertainment network with a programming slate that is an extension of CNBC’s distinct brand. Primetime series include “The Profit,” “Shark Tank,” “Jay Leno’s Garage,” “Billion Dollar Buyer,” “The Deed,” “American Greed,” and “Secret Lives of the Super Rich,” among others.

The new “Deal or No Deal” is produced by Truly Original, a subsidiary of Endemol Shine North America, with Steven Weinstock, Glenda Hersh and Scott St. John as executive producers. Jim Ackerman and Christian Barcellos are the executive producers for CNBC.”

What do you think? Are you a fan of Deal or No Deal? Will you watch the CNBC reboot?

This is a great show, the family enjoys watching. We are wondering if it is still in production (2021). It’s a bright light on these dark days. It is good clean fun and excitement without harassment.

Please do not take this game off tv, I love that game show they should have a 2 hr show instead of 1!!! Please don’t remove the show!!!

Love, love, love that show!!! Howie Mandel is the best host ever and I’ll be thrilled to see him do it again! Would love a shot at being a contestant…..it would be life changing whether I win or not.

How about I show up on one of the shows for Double Deal Or No Deal!!!!

Since when does CNBC do game shows? I shall welcome Deal or No Deal back.

I love DEAL or NO DEAL. Nothing would make me happier if I could be a contestant. How can I get information to be on the show

I’ve been waiting for NBC to bring this show back for years. I don’t have cable but I am sure I will find a way to stream it online somewhere. Can’t wait and Howie’s back.

Now, CNBC is bringing Deal or No Deal back. What about Hollywood Squares, Weakest Link and The Chase?

I like Howie & I liked the show as it originally premised. However, they soon started doing over the top tricks & stunts with the contestants that got cloying & irritating. Seriously all the contestants being “afraid” of heights & then of course being taken to the studio ceiling for more money could happen once not every other show. And don’t ever waste thousands of Q-tips for someone who says she uses 20 a day. Just stick to the briefcases.

Wonder If Any Of The Old Models Will Be Back

My cable package doesn’t give me CNBC. No big deal.

Yes,please bring back Deal or no Deal I loved that show and having back Howie Mandel that’s a super idea it was a very entertaining show and very funny.