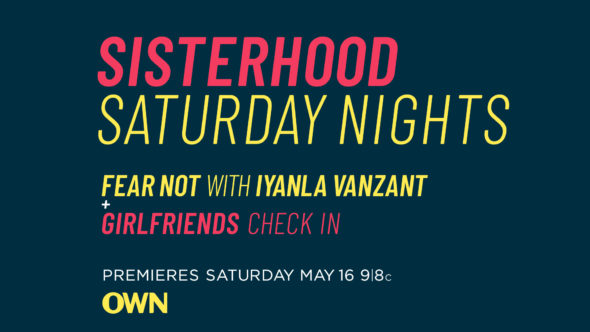 OWN is adding two new unscripted series to its line-up for Saturday nights. Fear Not with Iyanla Vanzant and Girlfriends Check In will arrive on the network in May.

OWN revealed the following about the new series in a press release:

“While the nation is staying safer at home together, OWN: Oprah Winfrey Network announced today that beginning May 16, Saturday nights become “Sisterhood Saturday Nights” with the launch of two new limited unscripted series joining the network’s popular lineup, each filmed virtually.

Girlfriends Check In (10 p.m. ET/PT) brings different groups of female celebrity friends together each week for virtual get togethers where they share laughter, support, love, and gossip. Episodes of “Girlfriends Check In” will feature actress, author, producer and director Meagan Good with her sister La’Myia Good Bellinger, and actresses Tasha Smith and Grace Byers from “Empire.” The fun will continue with “The Real” host Loni Love along with comedian and internet star B. Simone, actress and television personality Tami Roman, and celebrity hair stylist Robbi Rogers. More names to be announced.

“Now more than ever before we want to provide our audience with programming that unites and uplifts us,” said Tina Perry, president, OWN. “We are excited to bring together sisterhood on Saturday nights, and we are grateful to Iyanla and all of the girlfriends for sharing hope and a little bit of light during this time.”

What do you think? Will you watch these new shows on OWN?

Iyanla has been one of my favorite therapist for years. Any format she uses will be well done and a success. Once again, thanks to Oprah for your vision.