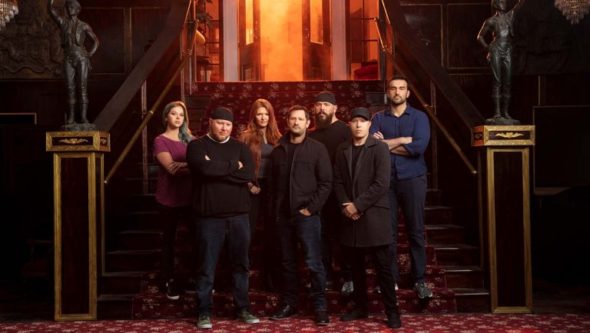 A&E revealed more details about both shows in a press release. Check that out below.

Each one-hour episode of Celebrity Ghost Stories follows world-renowned psychic-medium Kim Russo as she brings some of the biggest names in entertainment back to the sites of their previous paranormal experiences for an unfiltered, emotional, and sometimes terrifying reunion with the ghosts of their past. In the premiere episode, Kim meets with rapper and actor Ice-T and his wife Coco as they explore a New Jersey factory and experience unexplainable events linked to the factory’s deadly past. While Ice-T considers himself a skeptic, the spirits they encounter might make him a believer. Other stars Kim works with this season include Paula Abdul, Terry Bradshaw, Taye Diggs, NeNe Leakes and Kelly Osbourne.

Ghost Hunters returns with indisputable evidence of life after death. In season 2, the team heads into uncharted territory to be the first to investigate reports of paranormal phenomena in some of the nation’s most remote locations. Their journey takes them to isolated, distant corners of the United States where they confront extreme conditions and desolate terrain. The team seeks out forgotten worlds where darkness and death plague residents who have been forced to live with the unknown. Despite mysterious and unnerving warnings from locals, the Ghost Hunters face their fears and stay on mission: to help people confront terrifying paranormal encounters that have shaken them to their core. In doing so, they capture their most compelling, persuasive evidence in over a decade. New episodes of Ghost Hunters will air Wednesdays at 9pm ET/PT following the two episode premiere on April 8 beginning at 8pm ET/PT.”

Check out the trailers for both series below.

What do you think? Are you excited to see the return of Ghost Hunters and the reimagined Celebrity Ghost Stories on A&E?

I loved watching I-Tea and Cocoa, and Kim. It was so interesting and a little scary. Looking forward to more.