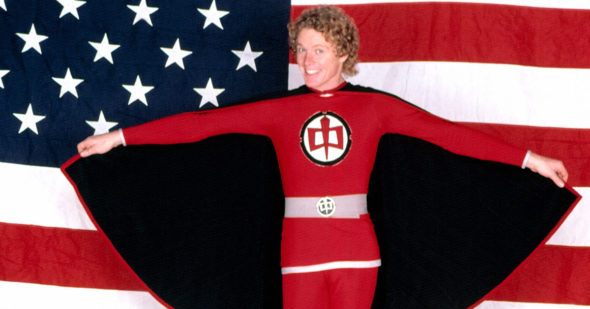 The Greatest American Hero is back. According to The Hollywood Reporter, ABC has ordered a female-led reboot of the ’80s TV show.

From Fresh Off the Boat producers Rachna Fruchbom and  Nahnatchka Khan, ABC‘s Greatest American Hero reboot will center on “Meera, a 30-year-old Indian-American woman from Cleveland, whose talents include tequila drinking and karaoke and not much else. Then some aliens entrust her with a super suit to protect the planet, and the world has never been in more unreliable hands.”

This isn’t the first time a network has tried to resurrect The Greatest American Hero. In 2014, FOX ordered a remake from Phil Lord and Chris Miller, but the project didn’t make it past the pilot stage. And, in 1986, NBC produced a pilot with the show’s original cast called The Greatest American Heroine. The project was re-edited as an episode of the original series but never materialized as anything more than a one-off special.

What do you think? Have you seen The Greatest American Hero? Would you watch the reboot?

I would give the new version a try to see if it would work out. However the original is all most always better.

I love the original, but don’t think too much of this new version. If you were sticking closer to the old version maybe, but a drinking female version who is going nowhere doesn’t sound very appealing.

I am a big 80’s fan, I loved the 80’s version of “The Greatest American Hero”, and I can’t get enough of the theme song, “Believe It Or Not.” BUT when I read what the reboot was going to be about, I thought “that won’t last.” Those special powers of just drinking tequila and karaoke: that’s just dumb, those aren’t even super special powers. You’re not going to get much of a captive audience with that. If you’re going to reboot any old tv show: keep it to the original plot as much as possible, with very slight (almost unnoticeable)… Read more »

curt b
Reply to  Michelle L.

drinking tequila and karaoke would be her human skills. the suit abilities would likely be like the original – flight strength speed xray visions and invisibility. Ralph’s teaching job was always the weaker aspect of the show. She should have a government type partner with resources like the original show. We shall see…

Come on are you kidding me this is ridiculous it will never work. There’s gotta be a better idea than that for a reboot.If you’re going to reboot it make it better not worse.

With all the crap networks are redoing, this is not shocking. Soon all this will be causing a mess down turn in ratings. Until then let then brainless network nitwits do this until then.Brainless in talentless people creating more crap that is way past it’s prime.

I always wanted the Greatest American Hero to come back as a motion picture reboot. I can’t wait to see the TV reboot. Let’s hope it does the late producer well.