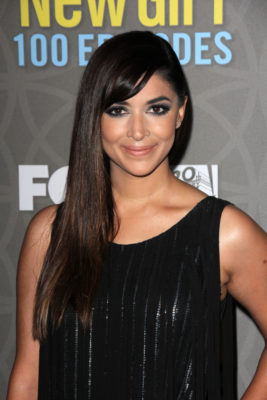 ABC finally has a hero. Deadline reports Hannah Simone will star in the network’s reboot pilot for The Greatest American Hero.

On The Greatest American Hero, Simone will play “Meera, a 30-year-old Indian-American woman from Cleveland, whose talents include tequila drinking and karaoke and not much else. Then some aliens entrust her with a super suit to protect the planet, and the world has never been in more unreliable hands.”

The ABC reboot comes from Fresh Off the Boat producers Rachna Fruchbom and  Nahnatchka Khan.

What do you think? Do you remember The Greatest American Hero? Would you watch the reboot?

I really liked “Greatest American Hero” when I was a kid, but I haven’t seen it since then, so I don’t know I’d have the same affection for it now. Hannah Simone is wonderful in “New Girl,” but I’m not sure about her in sort of the William Katt role. That said, since I like her and liked the original show, sure, I’d give it a try. I’d be curious how they approach it, so it’s worth turning on to see. Who knows, I might be pleasantly surprised by this new configuration of the show.

The original was before my time and I’ve seen very little of it and as of late this whole reboot/revival/remake business has gotten so ridiculous to where I’m just sick of it anyway. So no interest.

the original was barely tolerable, remakes are usually worse. No for me.

Two things they should endeavor to not change: the color and cloth design of the suit (certainly not to the pleather suits of armor on all the Berlanti series and the near-black of both the Berlanti and Snyder DC vehicles); and the title of the series. DO NOT retitle it GREATEST AMERICAN HEROINE. The feminine diminution is unnecessary in the 21st century atmosphere of equal rights. Since William Katt is, at 67 (in two days), a bit too old to reclaim the title role, it doesn’t bother me that his replacement is a woman. As unlikely as it might be,… Read more »

aliens? really? no thanks