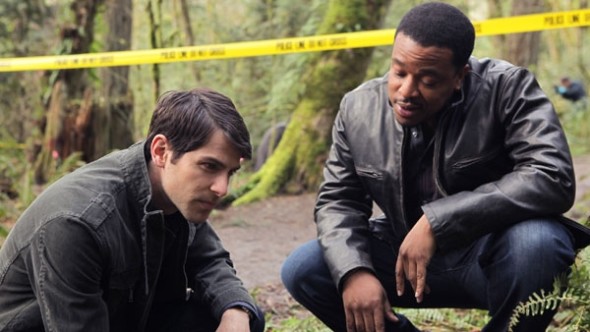 Holy yay!!! @NBCGrimm renewed for 6th season!! https://t.co/gD4f8XznWE Thank you @nbc and thanks to our amazing GRIMMSTERS!!!!

Got renewed just in time because I was about to put Henry to work with @PortlandPolice. (PS thx @NBCGrimm wardrobe!) pic.twitter.com/BuzcHXnBMK

‘Grimm’ Renewed For Season 6 By NBC https://t.co/3DWhuOXLbc via @deadline

In case you missed it, here is the NBC press release announcing Grimm has been renewed for season six.

“We absolutely love what our producers and cast have accomplished over the past five seasons,” Salke said. “They have created a whole new world of creatures and have a truly devoted fan base. We can’t wait to see what comes next.”

This season, “Grimm” originals are averaging a 1.7 rating in adults 18-49 and 6.4 million viewers overall in “live plus seven day” results from Nielsen Media Research. “Grimm” is one of the most time-shifted series on the broadcast networks, growing by an average of +90% in adult 18-49 rating (from a 0.91 to a 1.73) and more than 2.4 million viewers overall (3.9 million to 6.4 million) going from “live plus same day” to “live plus seven day” Nielsens. “Grimm” also generates an upscale audience, indexing at a 111 among adults 18-49 living homes with $100K+ incomes (with 100 representing an average concentration of those high-income homes).

As the nefarious forces of Black Claw take hold of Portland, Nick (David Giuntoli) must take a stand to protect his city and those closest to him, especially his child with Adalind (Claire Coffee). It will take the full force of Nick and his allies to find a way to bring the Wesen uprising to a halt.

Now that Capt. Sean Renard (Sasha Roiz) is poised to make his move to power, his allegiance to Nick will be tested and he will consider drastic measures to ensure his place of authority.

“Grimm” is a Universal Television and Hazy Mills production. The series was created by David Greenwalt & Jim Kouf and Stephen Carpenter. Sean Hayes, Todd Milliner (“Crowded,” “Hot in Cleveland“) and Norberto Barba (“The Bridge”) serve as executive producers along with Greenwalt and Kouf.

What do you think? Are you a fan of NBC’s Grimm TV show? Do you plan to watch the sixth season? Tell us.

NBC shame on you !!!
The Grimm is one of the best tv shows ever. How can you cancel this show that has great ratings similar to Harry Potter ? NBC you don’t care about the fans or the show. Seems it is just money !!!
Sad very Disappointed.

Grimm is such an awesome & unique show – There should be no reason to cancel it after season 6 because the story lines can & will keep us entertained for many seasons to come. My husband & I are in our 50’s and this is our number one favorite TV show that we can’t wait to watch each week. Please don’t take away this truly lovable & exciting show…

This is the only show I look forward to each week. Great cast, scripts, production. Wish it weren’t ending.

I am very happy that Grimm was renewed, I plan to watch the 6 season. Just as I watched all the other seasons. Grimm is the only show I watch on Friday night.
If it is cancelled I will not have any shows to watch on Fridays. In addition to watching Grimm on Fridays, I watch Grimm’s reruns on TNT at 4am, So yes
I am happy for the renewal.

My oldest son and I tune in every week. We absolutely love the show and can’t wait for the next season to begin.

Definitely, I look forward to Friday’s because Grimm is on that night! It is such an interesting concept, and all of the actors are excellent! I am very dismayed that some of the episodes have been cut, and it will not start until Jan. 2017! The Walking Dead is my very favorite series, and Grimm is my 2nd.
NBC, when you have a great show, don’t cancel it!

I love the Grimm show and sometimes stay up to watch episodes on TNT at
2:00 am in the morning!

Its my favorite show, I not only watch all the new episodes, I start each morning off with the old ones, I couldn’t start my morning without my coffee and my Grimm

I am soooo happy!! I agree with Cindi, the show needs more promotion.

GRIMM IS My Favorite Show. And, Writers GREAT JOB!!!!! You have kicked it up and really writing some new shows.
Network please advertise this show more. Thank You for making Grimm Nation HAPPY!!!!!!

My wife and I have been hooked on Grimm since the very first show and look forward to watching every Friday. We’re happy for the cast & crew and especially for us, the viewers.

Absolutely love this show!! So happy it has been renewed, Look forward to watching up and coming new twists on the show, Go Grimmsters,,,

i love that grimm got renewed.!! but were is trubel in all of this.?? trubel & eve, will, bring the ratings up again, i cant believe NBC give kouf & greenwalt, all the credit,?? i give the 2 little credit.!! credit go to the actors.!!