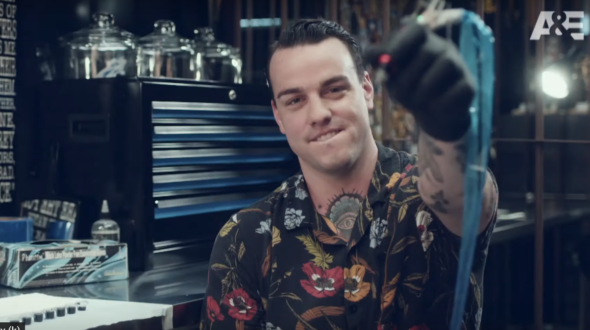 “Get a tattoo and tell us an amazing story.” A&E just announced the premiere date for their new TV show, Hero Ink.

The docuseries follows “the daily work at Prison Break Tattoos, a unique shop in Houston, TX that specializes in creating meaningful tattoos for first responders.”

New York, NY – April 16, 2019 – A&E Network will premiere the new original unscripted series “Hero Ink” following the daily work at Prison Break Tattoos, a unique shop in Houston, TX that specializes in creating meaningful tattoos for first responders. Bringing together artists who have a connection to the world of first responders and understand their sense of duty, Prison Break Tattoos is a haven for clients to share their stories and pay tribute to the moments on the job that have had a profound impact on their lives. “Hero Ink” premieres Thursday, June 6 at 10pm ET/PT with back-to-back episodes.

Each half-hour episode features stories from several first responders – including cops, firefighters, EMS professionals and members of the military. Prison Break Tattoos owner BK Klev, a 25-year veteran of the Houston police department, matches each client with the artist he feels will connect with them best and help tell their story through a tattoo. Featured artists are Rich who served in the NYPD for 11 years, military wife Janice Danger, former Marine “Tony 4 Fingers,” Zoey who was rescued by police as a child, and current Houston firefighter Robbie – all with a strong connection to the world of first responders. As the artists work to create a permanent tribute, each client shares their personal and often emotional stories of heroism which are brought to life through body-cam footage, news coverage, and personal photos.

In the premiere episode, Sgt. Sean “Sticks” Larkin, from A&E’s “Live PD,” stops by to get a special tattoo to commemorate his decades of service. Other stories featured include tributes to service animals, first responders who risked everything to help others on September 11th, heroes who came together to protect people and property from natural disasters, and teams who have made difficult decisions amid harrowing ordeals. In each case, the clients honor these stories of bravery through a unique tattoo that serves as a lifelong reminder to the moments and people who have impacted their lives and the lives of others.

What do you think? Are you interested in the stories of first responders? Will you watch Hero Ink?

We love this show! My husband was a first responder to the Pentagon. All 13 of us have watched every episode! Please renew it! Police have received such negative press lately it’s awesome these heroes are shown as they truly are! HEROES!!!!!

Yes, I would and do watch your show. always have tissues with me. I am 64 female and saw alot in my time and I have wondered how the first responders were doing. I’m just a plain jane never been in service. But my brother and nephew were in army. stepdad marines and my dad air force. Since I watched your show I wanted to get a tattoo like what you do. Been sad because had to put my mom in a nursing home and I feel lost. I was hoping to see if Any of your artists would have… Read more »

I am a disabled Navy Veteran, and a Line of Duty Injury, medically retired police officer, from Kentucky. My story of my line of duty injury was featured on Investigation Discovery’s Body Cam TV show, episode 8 “high stakes”. I was intentionally dragged and ran over by a fleeing felon, causing spinal injuries in my neck and back, that were career ending. You can also google my name and find other news articles about me.

The deep and heavy military/citizen patriots cannot and do not have tattoos or piercings. They are identifying marks to the enemy. My husband was one of G. Corben’s first 500 men and with him for 24 years.

I am a disabled..retired law enforcement officer..worked from patrol….to under cover..to a deputy warden for level 4 prison…
I already have ink but have never had THE TAT THAT REPRESENTS….my walk my life my journey as a female.As I grew as a woman..mother..officer..wife…and sister in service..I wouldnt have had any other life…the comeradery…the family created while in service…guided me to be the best…
I would LOVE to get tatted by Hero Ink…

I’m a police widow and would love to get a tattoo for the show!!! Is that possible?

I am an OIF veteran and would love to finish my sleeve. I am willing to pay full price but I want a true artist to help with the design and completion.

I am a USAF Vet of Desert Shield/Storm and Operation Southern Watch. I got a tattoo to honor my fallen brothers/sisters in the WTC attacks. It’s since faded and is complete junk. I’d love it if I could get is “fixed”. Not looking for a handout, just want it right.

i would love to be on the call list. my husband spent many years in the military & now our son is a police detective.
i have a hard time sleeping & a few years ago had to retire. i might have been able to make it to retirement if i would have had someone to talk to.