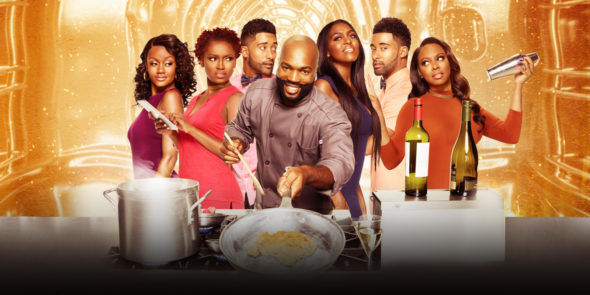 WE tv is hungry for more. Recently, the network announced they’ve renewed Hustle & Soul for a third season.

The docuseries “follows Chef Lawrence Page, proprietor of The Pink Teacup, who has big plans to expand the Pink Tea Cup Soul Food brand, among love triangles and staff drama that threaten to destroy his dreams.”

NEW YORK, NY – September 18, 2018 – WE tv announced today that its hit Thursday night series, “Hustle & Soul” has been renewed for a third season, coming off of a highly successful season two that grew viewership compared to the first season of the series. “Hustle & Soul,” produced by Big Fish Entertainment, an MGM Company, set in and around the famed Pink Teacup soul food restaurant, wrapped up its second season with rare season-over-season growth, increasing its audience by 10% among adults 25-54, 9% among women 25-54 and 7% in total viewers, compared to season one. Additionally, the season two finale episode delivered series highs among women and adults 25-54 in Nielsen Live+3 ratings and made WE tv the #1 cable network among African American women 25-54 for the majority of the season two run.

“‘Hustle & Soul’ burst onto the scene and quickly established itself as a staple of WE tv’s Thursday night lineup,” said Marc Juris, president of WE tv. “Our audience cannot get enough of Chef Lawrence and his over-the-top staff. There is a lot more story to tell and we are thrilled to continue follow this unpredictable and thoroughly entertaining group.”

Season three of “Hustle & Soul,” which recently started production, is expected to return in 2019 with 10 episodes. The series follows Chef Lawrence Page, proprietor of The Pink Teacup, who has big plans to expand the Pink Tea Cup Soul Food brand, among love triangles and staff drama that threaten to destroy his dreams.

What do you think? Have you seen Hustle & Soul? Are you glad it’s been renewed?

When is the new season starting

I hope the show continues for several seasons pleaseeee.. I love chef Lawrence.

I love this show, I hope they rethink cancelling it!

Yes absolutely!!! I love the show 100%.
Please please come back. Everybody. I want to see what everyone is doing and especially my girls Cola and Yandie

I love it, I can’t wait until the 4 season starts. I want to no more what’s going to happen in this big happy family.

I’ll just be glad to see it come bck on