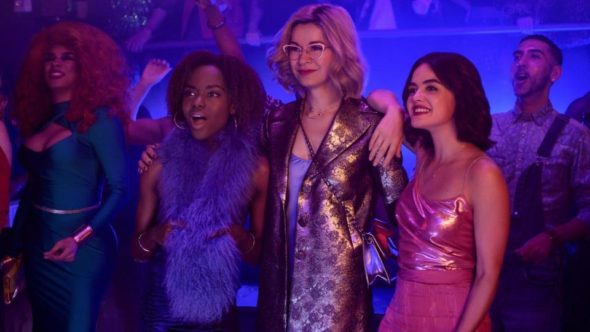 The CW isn’t keen on giving Katy Keene a second season. The smallest network has cancelled the drama series after one season of 13 episodes.

The first season of Katy Keene averaged a 0.11 rating in the 18-49 demographic and 480,000 viewers. Though other shows have had low numbers, The CW isn’t giving Kate Keene a second chance to improve its viewership. It is the only CW series of the 2019-20 season (other than those that were in their final seasons) to not receive a renewal.

However, Warner Bros. Television (the studio that produces the series), plans to shop the series elsewhere. According to Deadline, the cast’s options were extended for a month, until July 31st, while The CW decided the show’s fate. Now that the series has been officially cancelled, the studio will try to find a new home and close a deal this month. HBO Max, which carries the first season episodes, is considered to be a real possibility.

What do you think? Have you seen Katy Keene? Would you have watched season two of this drama series?

Given the absolute talent, quality of writing and overall production. Yes, please continue. I’m not in favor of the life styles I don’t identify with but see the show as all around quality along with songs and acting.

Disappointed the show is not coming back!

Lucy Hale was the weakest cast member. She has proven that she cannot anchor a series. Josie should have been the main character. That actress can actually act. CW pretty much renews everything. For them to cancel shows good taste. Long live the Pussycats

Lucy Hale is an AMAZING actress like hello PLL!

Really liked this show. It was fresh and made you care about it’s comic book live characters…. not easy.
I would love for it to be picked up elsewhere!!!! CW, big mistake! You

needs to be picked up by hbo max since it’s going global next year. a problem with katy keene was that it wasn’t going on netlfix so people had to watch it through a 3rd party stream.

Lots of people. just started watching it in Spain and we love it !
Please renew it. Thanks