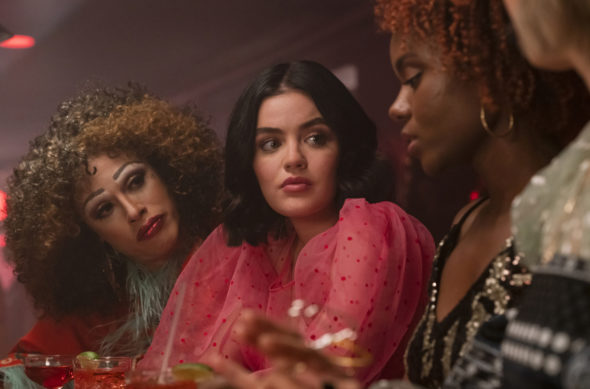 Will Josie return to Riverdale after the first season of the Katy Keene TV show on The CW? As we all know, the Nielsen ratings typically play a big role in determining whether a TV show like Katy Keene is cancelled or renewed for season two. Unfortunately, most of us do not live in Nielsen households. Because many viewers feel frustration when their viewing habits and opinions aren’t considered, we invite you to rate all of the first season episodes of Katy Keene here. *Status update below.

What do you think? Which season one episodes of the Katy Keene TV series do you rate as wonderful, terrible, or somewhere between? Do you think that Katy Keene should be cancelled or renewed for a second season on The CW? Don’t forget to vote, and share your thoughts, below.

*7/3/20 update: Katy Keene has been cancelled by The CW so, there won’t be a second season.

Katy Keene gives a loud and clear voice to the ever relevant struggles of young individuals today trying to find success in achieving dreams while maintaining the strength of confidence in their own self evolution. The core principals of life philosophy, and positive approach to the current human condition is a breath of fresh air from all the current dark and violent dramas – and I guarantee is not lost on young minds watching. Inspirational, a young version of Sex in the City, and can’t wait for season two.

This show is not riverdale and it shows. It really just seems like a way to push liberal ideology on young moldable minds (because everything today has to be politicized) instead of making a show that all teens will enjoy. This show is perverted and I for one wont let my daughters watch this garbage and neither should you. Katy keene is pathetic.

Watched the first episode and like it so far. I have always loved Lucy Hale, she is a very talented young lady. I started watching Pretty Little Liars because I was already a Holly Marie Combs fan. It made me an even bigger fan of Lucy Hale. I also watched Lucy in Privileged. I’ve seen most of the movies she has done. I really enjoyed her hosting with Ryan Seacrest on Dick Clark’s Rockin’ New Year’s Eve! I have seen her on there since 2016, but I loved her being with Ryan in New York better than in LA. I… Read more »