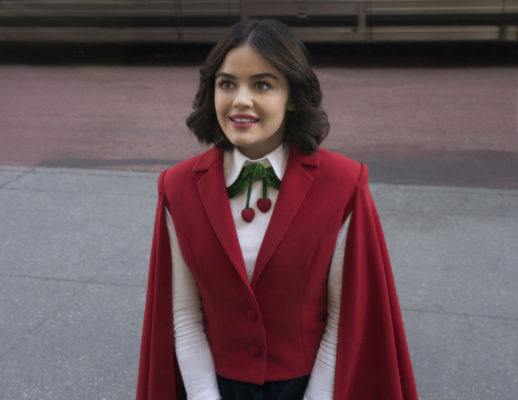 Katy Keene wraps its first season tonight, but will there be a second? Recently, CW boss Mark Pedowitz spoke with Deadline about the decision to renew or cancel the TV show.

Katy Keene‘s first season airs its finale on The CW tonight, May 14th, at 8 p.m. ET/PT. But what about a second season? The CWboss Mark Pedowitz says the network will make a decision in a few weeks:

The linear ratings have been soft but we have seen some good streaming viewership. We’ll make a decision in a few weeks.”

Ratings for season one of Katy Keene haven’t been great. So far, the season is averaging a .12 rating in the 18-49 demo and 485,000 viewers, making it one of the network’s lowest-rated series for the 2019-2020 season. Nevertheless, Pedowitz says the network will take streaming numbers into account before making a decision.

What do you think? Are you a fan of Katy Keene? Do you want a second season?

I love this show! Please renew for a second season! Especially with this cliffhanger

Please do not cancel Katy Keene

Love the show! The characters, the fashion, the music. Season 2 has so much to offer . Onward and upward!

Please do not cancel Katy. I’m 80 yrs old and love this show. I cannot wait until 8:00 w drink and snack in hand
For me it’s a happy show and exciting. Watching young people prepare for their future dream come true
Job. Love love love do not cancel!!!!!!!

Please please please bring back Katy Keene. I love everything about this show, every week I cannot wait until Thursday when I get home from work at around 11:30 with my late night snack and I sit down and watch this inspiring, good feeling, amazing show. It’s a little bit of everything that everyone in their lives needs right now, and definitely in the future. So please continue to create something so magical that it lifts my spirits from a hard day of work and gives me something to look forward to on a Thursday night. The cast and crew… Read more »

Please please bring it back!!!

Please please continue Katie Keen. More people will watch the second season now that they know the characters. The show is innovative and current showing all the possibilities of human creativity and entrepreneurship. Similar to the ways people have met needs and will continue to during this Pandemic.

I’m a big fan of Lucy Hale and hope Katy Keene will get a second chance and she will find her father.