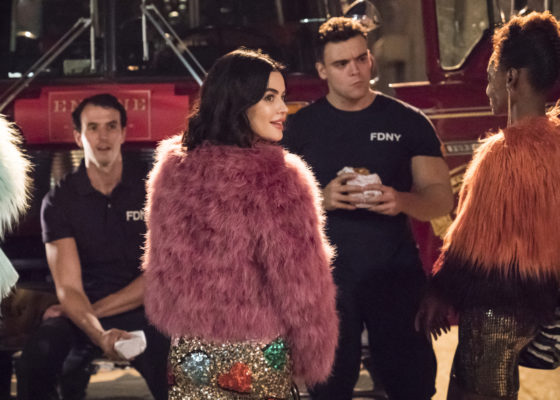 Is success all it’s cracked up to be? Has the Katy Keene TV show been cancelled or renewed for a second season on The CW? The television vulture is watching all the latest cancellation and renewal news, so this page is the place to track the status of Katy Keene, season two. Bookmark it, or subscribe for the latest updates. Remember, the television vulture is watching your shows. Are you?

The first season of Katy Keene averaged a 0.12 rating in the 18-49 demographic and 480,000 viewers. Find out how Katy Keene stacks up against other The CW TV shows.

Will The CW cancel or renew Katy Keene for season two? This show is based on an existing property, is connected to Riverdale, and is made to attract young female viewers. The network also ordered 13 additional scripts before the show even debuted. I have no doubt that it will be renewed though the linear ratings could certainly be a lot better. I’ll update this page with breaking developments. Subscribe for free alerts on Katy Keene cancellation or renewal news.

7/3/20 update: Katy Keene has been cancelled by The CW so, there won’t be a second season.

What do you think? Are you sorry that the Katy Keene TV show has been cancelled by The CW? Would you have watched a second season?

The show Katy Keene brings back fond memories of my childhood when I read the comic books. Comic books were a big part of my childhood and I could hardly wait for the next issue
to be available on the newsstands. I do hope that there will be a 2nd season. All of the actors
are very talented and I really love the show. It’s so much better than most shows of that kind.

I really love this show for whatever reason. I don’t fit the usual demographic, but it reminds me of my younger days when anything seemed possible if you worked hard enough for it. It makes me feel young again for an hour. I love all of the characters- especially Jorge/Ginger and Pepper. Please renew it for season 2 and don’t doubt that more people outside of your main demographic are watching.

Katie Keene is my favorite show!! I love every character, they are so talented!

I like Katy Keene more than I was expecting because it is different than Riverdale and not so dark.