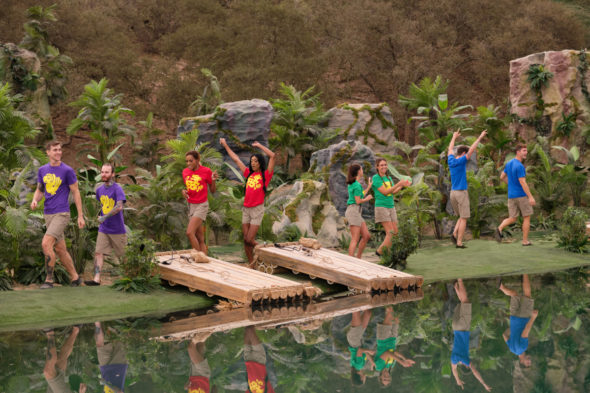 A CW competition series, the Legends of the Hidden Temple TV show is an adult version of the game show that ran on Nickelodeon 1993-95. The challenges are tougher and there’s a much bigger prize on the line — $25,000. It’s hosted by Cristela Alonzo with Dee Bradley Baker returning as the voice of Olmec, the giant talking stone head located at the gate of the game’s temple. In the competition, four teams of two go on a quest, but only one team will be “strong enough and smart enough” to enter the ominous Olmec’s Temple, avoid the dreaded Temple Guards, retrieve a lost treasure, and return it to its rightful heir.

*6/4/22 update: Legends of the Hidden Temple has been cancelled by The CW.

I am shocked that CW canceled this. I enjoyed the show, it was every bit as good as the original. Plus that new song that played when the contestants did the temple run? Epic as hell, every bit as tense as the original, if not more so. I would watch the episodes again just to hear it. Whomever composed it was genius. I hope another network picks this show up, it deserves more than what was given.

I hope it gets renewed. I didn’t even know this show was on until last week. Terrible job marketing it by the CW, and scheduling it where nobody will see it.