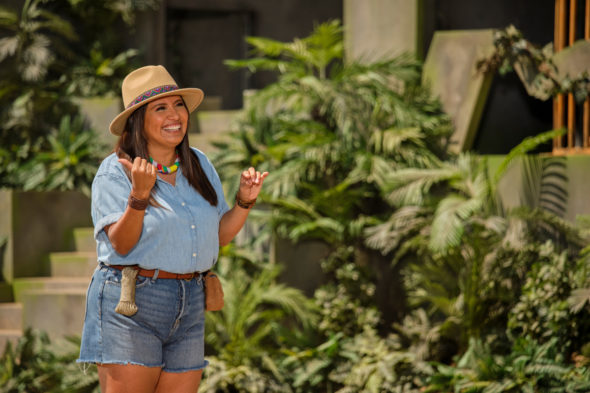 Olmec won’t be back for the 2022-23 television season. The CW has cancelled Legends of the Hidden Temple so there won’t be a second season.

A competition series, the Legends of the Hidden Temple TV show is an adult version of the game show that ran on Nickelodeon 1993-95. The challenges are tougher and there’s a much bigger prize on the line — $25,000. It’s hosted by Cristela Alonzo with Dee Bradley Baker returning as the voice of Olmec, the giant talking stone head located at the gate of the game’s temple. In the competition, four teams of two go on a quest, but only one team will be “strong enough and smart enough” to enter the ominous Olmec’s Temple, avoid the dreaded Temple Guards, retrieve a lost treasure, and return it to its rightful heir.

Airing on Sunday nights, the first season of Legends of the Hidden Temple averaged a 0.06 rating in the 18-49 demographic and 222,000 viewers in the live+same day ratings (including DVR playback through 3:00 AM). With live+7 day ratings, the series picked up just an additional 76,000 viewers. It was one of the lowest-rated series on The CW’s 2021-22 schedule.

Due to the network being for sale, it was an unusually big year for cancellations at The CW. The smallest broadcast network also dropped 4400, Batwoman, Charmed, DC’s Legends of Tomorrow, Dynasty, In the Dark, Legacies, Naomi. and Roswell, New Mexico.

What do you think? Have you watched the revival of the Legends of the Hidden Temple TV show? Are you disappointed that this series has been cancelled on The CW?