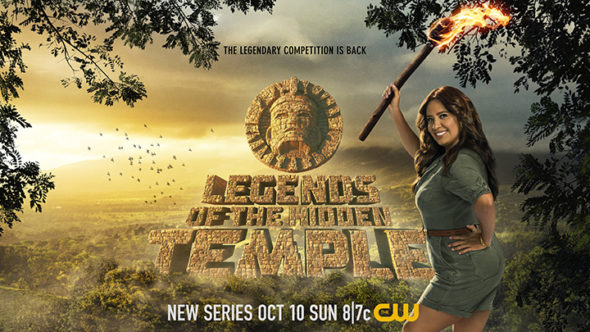 The original Legends of the Hidden Temple was created for kids and debuted nearly two decades ago. Now, The CW has resurrected the series for adults. Will the original’s now-grown audience be interested in a revival? Will it be cancelled or renewed for season two? Stay tuned.

A competition series, the Legends of the Hidden Temple TV show is an adult version of the game show that ran on Nickelodeon 1993-95. The challenges are tougher and there’s a much bigger prize on the line — $25,000. It’s hosted by Cristela Alonzo with Dee Bradley Baker returning as the voice of Olmec, the giant talking stone head located at the gate of the game’s temple. In the competition, four teams of two go on a quest, but only one team will be “strong enough and smart enough” to enter the ominous Olmec’s Temple, avoid the dreaded Temple Guards, retrieve a lost treasure, and return it to its rightful heir.

1/24 update: You can see the latest night’s ratings in context.

What do you think? Do you like the Legends of the Hidden Temple TV series on The CW? Should it be cancelled or renewed for a second season?

Because I could do video on YouTube for season two ad