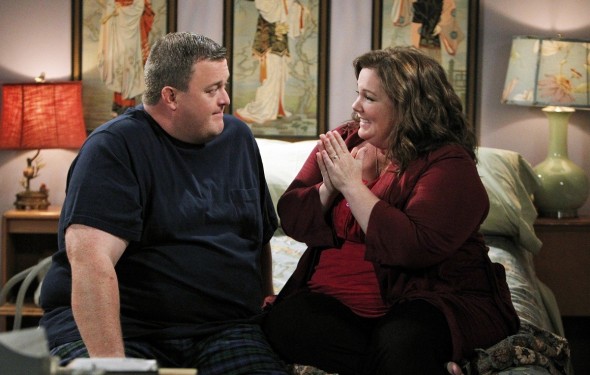 It was looking like Mike & Molly might be cancelled this time around but CBS has renewed it for a sixth season.

The 13 episodes of season five that have aired so far have averaged a 2.0 rating in the 18-49 demographic with 8.97 million viewers. Season-to-season, that’s down slightly in the demo but up a bit in viewership. It’s the sixth-highest rated sitcom on the network this season.

Mom has also been renewed for the 2015-16 season. The Big Bang Theory is one season into a three season renewal so Lorre will have at least three comedies on CBS next season.

What do you think? Are you glad that Mike & Molly is returning for a sixth season or do you think it should have been cancelled instead?

love the Mike and Molly shows better then The big Bang

Mike and Molly – It’s my favorite show on TV – I don’t watch a lot of TV… but, this is a great show. Cancel something else!

Please don’t cancel it, its me and my husbands favorite show! We are very upset that there is only 13 episodes in the 6th season. RENEW MIKE AND MOLLY!!!!!!

I think this is a tragedy. I agree with Dorothy. Isn’t there a way fans can write to ask please not to cancel? Star Trek originally was set to be cancelled and other shows but fans determination kept them on the air. This site tells of others: http://io9.gizmodo.com/5875356/fan-campaigns-throughout-history-that-saved-scifi-and-fantasy-tv-shows The super loyal fans should just not watch anything but Mike and Molly when it comes back on next month? This is the one show that makes me laugh out loud and real belly laughs. Each character on this wonderful show is awesome…. Thank you for reading this. I just feel somehow… Read more »

With so many fans, why is this quality comedy being cancelled?? This show is a winner and CBS is making a huge mistake. Producers, this show has a huge following…Have you guys shopped the cable market with it? Is there a way for fans to have their voices heard?…I am as annoyed as I am upset. Can we the fans write to anyone? Is there a cable channel that listens to viewers, because this network is obviously not listening…Please tell Mike and Molly fans who o contact to let them know what a successful show this is…Maybe Melissa McCarthy should… Read more »

Mike and Molly is the best show ever!!!

i love mike and molly keep them on please

Why the hell would anyone want to cancel mike and molly but keep mom???? What are you guys on? Mike and Molly is the best comedy series that you can watch with the whole family. Once you take it off im done watching cbs cuz this is WRONG!!! Please make it right so we can be happy again. Thank you

I love both Mike and Molly and Mom. Glad to get any new episodes… Please don’t stop making me laugh out loud!

I love Mike and Molly. I have watched it every week since day one. I think they need to keep it on air.

Sadly according to the casts FB Page, CBS has cancelled Mike & Molly. They have shortened Season Six down to 13 episodes. The cast and the show will wrap-up production at the end of January. They tried shopping the show around and apparently there was no interest. No word yet where CBS will air the last 8 episodes after it ends it 6 week run on Wednesday nights starting in January at 8:30pm. The network just didn’t give it a fair shake…always used it as a mid-season replacement…hard to find and build an audience when the show is off air… Read more »

Sadly the show has been effective cancelled by CBS according to the cast FB post. Season 6 has been chopped down to 13 episodes. They wrap up taping the show the last week in January.

So its Decber 7th where is mike and Molly?