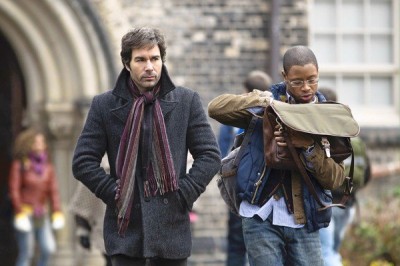 In 2009, Eric McCormack returned to series television in Trust Me, a show that co-starred Tom Cavanagh. It lasted just 13 episodes but tonight, McCormack returns to the cable channel in a new TV show, Perception. Will it outlast Trust Me or will it be cancelled after one season as well?

Perception premieres tonight on TNT. Is it worth your time? Here’s what the critics are saying:

USA Today: “This reduction of a serious, debilitating illness to a personality quirk would be as unwatchable as it is insulting were it not for one thing: an appealingly disheveled star turn from Will & Grace’s Eric McCormack as Daniel. He’s not enough to save the show, but the mix of humor and pathos he brings to the role does at least make watching Perception a bit less of a chore.”

Boston Globe: “I am inclined to root for McCormack. He was a huge part of one of TV’s most cleverly subversive sitcoms, Will & Grace, which turned sexual orientation into something funny instead of fraught… I want him to find TV success after Will & Grace, just as Julia Louis-Dreyfus has after Seinfeld, rather than find himself in a professional corner in the shadow of his early cultural impact (see: Jason Alexander). But no matter how much McCormack throws himself into his Perception role, balancing dramatic A Beautiful Mind-like heft with Monk-like humor, he’s still driving a faulty vehicle. No amount of good will from Will & Grace can change that.”

LA Times: “If only the strokes weren’t so broad and easily anticipated, if only the paranoid schizophrenia weren’t so actually horrible and devastating, rather than quirky and revelatory. Co-creators Mike Sussman and Kenneth Biller are on to something with their exploration of the endless and fascinating facets of perception. But too often it seems like they have chosen to afflict their character in this manner simply because all the other dysfunctions have already been taken.”

NY Daily News: “Thanks largely to McCormack, but also to Cook and others, Perception is fun to watch. In the end, though, it may go one laser light too far. When a case seems to hit a dead end, the producers break out a new behavioral quirk, or a new hallucination, or a new imaginary friend who cracks it. Maybe at a certain point it won’t feel like all this is a little too gimmicky, or that the rules are being made up as we go along. Out of the box, it kind of does.”

NY Times: “Mr. McCormack puts Pierce’s vulnerability and fear in the foreground, and avoids the huckster’s smirk that can sometimes mar his performances; he’s winning, and he has an easy rapport with Ms. Cook. For more critical viewers, though, that may not outweigh the show’s forced eccentricities, or the way in which ideas and motifs from Monk, House, The Mentalist, Numbers and other series clank around in plain sight.”

Boston Herald: “If you were to take this series seriously — and you won’t — you’d find it fits with the genre that exalts those with mental disabilities as savants (starting with Forrest Gump). Daniel’s schizophrenia — which he refuses to treat — isn’t an affliction, it’s a super-power. ‘Rationality is overrated, particularly if you’re a Cubs fan,’ he says. Maybe. But Perception is a head trip not worth the journey.”

What do you think? Will you watch the Perception TV show? If you’ve already seen it, will you watch again? Was the premiere “too political” for you?

I loved the premier and will definitely watch it again. I enjoy watching mysteries with a twist even if it can be far fetched…it is TV after all…and I watch for entertainment not for reality’s sake…I have enough reality in my own life thank you very much. I really do enjoy quirky …and Eric McCormack plays a character I want to root for and believe in.

I’m with Evelyn the nurse. Love Eric McCormick, but it’s insulting to treat a mental illness like an idiosyncrasy and sets a terrible precedent by advocating that mentally ill patients don’t need to take their medication. The Boston Herald got it right. And I am not in the health field and do not even know anyone with this mental illness. It’s just obvious to me.

The plot was interesting enough nothing special. Cast seems to interact well. But right out of the gate they make a false political statement. I won’t be watching this one. I TV for entertainment not to have someones political views forced on me.

The show is not airing in Canada yet, but shall be soon on Bravo.

I am bipolar. There are a great many truths in the “What is normal?” Speech at the end of the program. It is hard to stay on your meds, for many reasons. This program seems to draw losely from “A Beautiful Mind”, a mostly true story. I think, for me this show bears watching for it’s entertainment value, but also for it’s few points of interest regarding mental health issues.

As a 50+ year old pseudo-psychologist returning back to college for a 2nd career, I found the show to be more than just a few flowery words but great!!! It is a shame that Mr. McCormick’s best series thus far is more suited to people that enjoy a mentally challenging forms of entertainment. But then there are the two categories of audience I enjoy taunting. A. Those that consider themselves presiding over a show’s success or demise as many talent challenged reviewers have become. (daa!!!……. Can you perceive entertainment as being circumstantially elective? ) (LOL) B. Those that enjoy seeing… Read more »

There is nothing wrong with the setup. I like that Daniel Pierce is decidedly more socially awkward than The Mentalist’s Patrick Jane, Body of Proof’s Megan Hunt, or House. Eric McCormack shines in this role, and it’s fun to try and figure out whether Daniel is hallucinating or not. The only problem I have is with the “crime of the week”. It’s just not interesting enough.

Within the first few minutes it made fun of President G.W. Bush, accusing him of being a liar. This wasn’t necessary. I was looking forward to this show, but it is just another Hollywood production used to insert political bias. I want to be entertained, not politicized.

LHutch » Actually, as I recall it was about 40 minutes into the episode.

Yes, with the cut of Bush into the script it was blatantly political. The addition of Clinton at the end didn’t dispell the intrusion of unecessary politicisation of a tv show. When will writers learn.

[…] scene lasted a minute or so and wasn’t the focus of the episode but many people have expressed upset over it and have vowed to never watch the show again. (Despite the fact that Jimmy was later seen […]

My husband and I enjoyed this show immensely! Will not miss an episode!

Loved the show and found Eric McCormack’s performance spell binding. For those picking it apart remember it is a TV show and a good one. Lets hope it stays on.

It’s better than the Mentalist, which I love. Great quirky storyline, acting, location and filming. I hope its picked up for another season.

AS A RETIRED PSYCHIATRIC NURSE, I WILL NOT WATCH THIS SHOW AGAIN, EVEN THOUGH I LIKE ERIC MACCORMICK. tOO MANY PATIENTS STOP TAKING THEIR MEDICATION WHEN THEY FEEL BETTER. THE MAIN CHARACTER IN THIS SHOW STOPPED TAKING HIS MEDICATION ALSO, WHICH IS A BAD MODEL FOR ILL PEOPLE. HIS CHARACTER TRIVIALIZES THE MENTAL ILLNESS. I DON’T THINK THIS EXAMPLE IS GOOD FOR ORDINARY PEOPLE, WHO NEED TO FOLLOW DOCTOR’S ORDERS IN ORDER TO FUNCTION IN LIFE.

I have some experience with mental health and medical law issues. If every form of entertainment was banned that has a potential of having adverse side-effects, there would be no books, no movies, no writers, no academics, no theater, no science, you would have no job and we all would still be living in caves minus the wall art. I am not aware of any level headed practitioners that feels fiction will in many or most cases thrump judgement with the possible exception of those suffering from survive mental maladies. It is a form of entertainment which does not require… Read more »

Loved the show and will watch it weekly. Erick McCormick
Is one of my favorites.