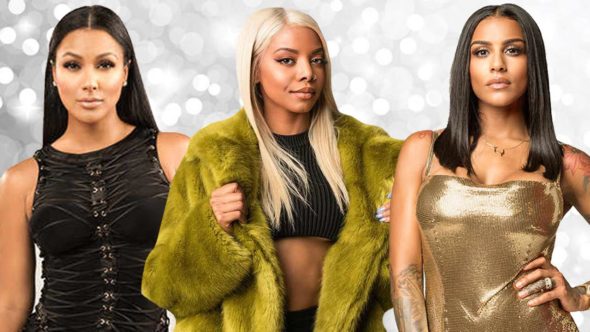 The Platinum Life may be over. According to The Jasmine Brand, E! has cancelled the TV show after only one season.

The reality series follows musicians “Asiah Collins, Alycia Bella, La’Myia Good, Shantel Jackson, Nazanin Mandi, Lola Monroe and Crystal Smith as they indulge in the VIP life with their significant others who happen to be some of the biggest names in the music industry including Nelly, Eric Bellinger and more.”

According to The Jasmine Brand, E! has cancelled The Platinum Life due to poor ratings. The network has not confirmed the news as of reporting.

What do you think? Have you seen The Platinum Life? Would you have watched a second season?

Look forward to season 2. Good feedback from my friend also who watched.

Here in London UK me and my sis watched season 1. We love Crystal. Thought the show was great with the least of ratchet behaviour and a touch of class in comparison to other shows we watch and enjoy hehe

I’m salty there’s no season two I love the show. I thought it was a down to earth show. Please come back on

I thought it was a cracking series. Cannot understand why it wasn’t advertised more because it would have been a massive hit of it had been. Fingers crossed they get a second series off the ground.

Patiently waiting in South Africa for season two, love these ladies I’m all for female independence and sisterhood please bring it back!!

Was looking forward to seeing season 2.

I loved season one was waiting for season two that’s a shame there isn’t going to be one.

Aww I still have season 1 save. I love this show these lady have so much class not like these other shows where u wanna change the channel cuz it so much hate n shade..this show desires way more then 1season im sad

Please bring back platinum life for a 2nd season

I really tried to get into it but, it was boring. Plain and simple.

Yep waiting and waiting in the uk for season 2, watch hip hop alanta/ Hollywood on 4 music. This one had a different edge to it ,maybe some promo push . I will be disappointed if I don’t get a few more seasons, come on E , watching the kardashians other day, love them but not much going on there. If all else fails 4 music step up please

“the biggest names in the music industry including Nelly…”