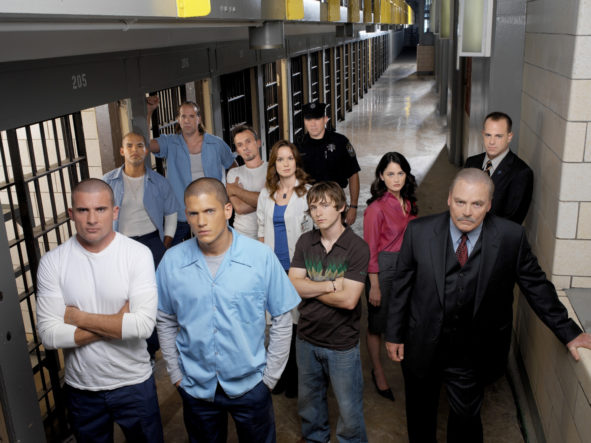 TV show description:
This drama follows Michael Scofield (Wentworth Miller) as he works to free his older brother Lincoln (Dominic Purcell) from a maximum security prison. “Linc” has been wrongfully convicted of the murder of the Vice-President’s brother and is scheduled to be executed.

Michael takes drastic measures to get himself incarcerated alongside his brother and, once inside, begins to execute an elaborate escape plan.

Among those fighting for the brothers on the outside are lawyer/friend Veronica Donovan (Robin Tunney) and Lincoln’s teenage son, L. J. Burrows (Marshall Allman).

Series Finale:
Episode #90 — Behind the Eyes
Dangerous threats keep Michael and Lincoln fighting to protect Sara and Mike. Meanwhile, Poseidon continues to try and outsmart Michael and the rest of the gang, which leads them to the ultimate showdown, and not everyone makes it out alive.
First aired: May 30, 2017.

What do you think? Do you like the Prison Break TV show? Do you think it should have been cancelled or renewed for a sixth season?

Plz Fox Tv i request u to start Prison break 5. we r very much keen to see michael alive… n it should not b end like this ! I think u work for the interest for viewers … so plz keep this request …………………. we want michael , linc, sara, sucre, t bag, alex …. with Prison break 5!!plz plz plz

WE ENJOY PRISON BREAK WE NEED SEASON 5 TO COME. I THINK MICHAEL SUFFER AND WENT THRU ALOT JUST TO FINISH IT THE WAY IT DID. IN SEASON 5 HE SHOULD ESCAPE WHERE THEY HAVE HIM IN JAIL OR HIDING SOMEWHERE SO HE COULD REUNITE WITH HIS FAMILY. WE NEED SEASON 5 WITH THE SAME CAST MEMBERS EVERYONE WHO CAME OUT ON THE OTHER SEASONS. THANK YOU

Please bring back prison break 5 PLEASEE Is the best show everr !!! And like one of the fans said with more Advertising maybe more people will watch !! PLEASEEE BRING BACK PRISON BREAK !!!

There are much things are open ,also michael promised in the first season to take care of the daughter from Charles Westmoreland ,what he never done. There is so much more unfinished and for Michael to pretend that hes dead would make so much sense. He knows if hes alive they never let him and his family to live in peace. I want Sara and Michael to finally set sail with the boat, and to run the diving school in panama… that would be a better when leting him die.

Hi all, just want to ask you to please concenter to bring back Prison Break season 5.
I had started watching my grandbabies while my son goes bowling. Put the kids to bed at 8 ande find the program on net frlix and now i am so hooked. Got my mom hocked on it to and she said this was better then soaps lmao. What ever it takes plseeeeeeeeeeeeeeeeeeeeeeeeeeeeeeeeeeee bring it back.

It can’t end w the brains nd main character dying, I love the show would love a fifth season because why end it the way it ended makin it all worthless for nothing. PLEASE RETURN prison break w wentworth miller, dominic, nd “sarah” hopin to see future w a child

Please bring michael back nd w a season five. Give it another chance. Prison break is such an exciting action show nd keeps suspicion on edge. They are great characters nd we would love to see a season five. Wentworth miller is the best! HUGE fan of them all but I love michael nd his intelligence! Thank you.

i love it is just that it cant end there y did he had to die (michael) after all he did he broke out of 3 prisons specially SONA that was the harder one i cry at the end………. there has to be more the cast was awsome i really enjoy watching the show

I loved this show so much, Wentworth Miller and Dominic Purcell were amazing actors I think everyone did a great job and I will love to see season five I just staring watching this show in netflix and me my husband and my son were hooked with this show and I didn’t like the way it ended it up with Michael dying but they never said anything about the police finding his body it will be amazing knowing he will come out alive like Sara did I think it will be a come up for Fox to come out with… Read more »

Mu husband and I are on *58 and I cannot tell you how “compelling” this series is. We are so sorry that we weren’t aware of it sooner, but now enjoy it so much. Insentive to get all our stuff done, a couple of tall cool drinks and we are down for the whole afternoon., This is our first series since retirement and now we really know WHY we are so happy to be retired. Thank each of the writters, directors, set people, lights “sets”, it is just all we can tell our friends about. I admire the comentary, the… Read more »

i do not like the finale f prison break because i fine it is the best series ever an people are waiting to see what life would michael and his brother would be living after the company has been destroyed an it would be really surprising what would season 5 would be about .