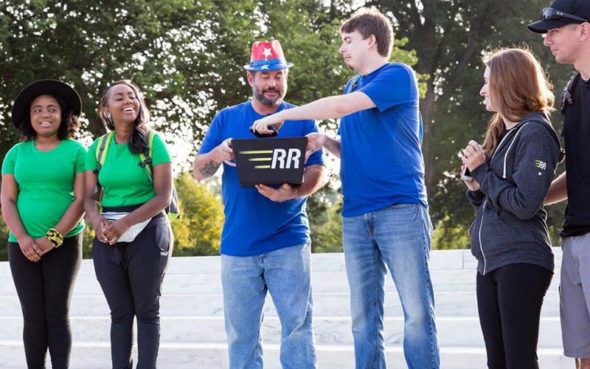 The race continues on BYUtv. Recently, the network announced season five of the TV show Relative Race will premiere on March 10th.

The reality competition series “follows four teams on a surprising, emotional 10-day journey throughout the United States as they complete challenges, discover unknown relatives identified through DNA testing and compete for a $50,000 grand prize.”

“After four seasons of ‘Relative Race’ you’d think we’d have seen it all, but the unexpected events in just the premiere episode of this season prove otherwise,” said Michael Dunn, managing director of BYUtv. “Three of the four teams are sibling pairs, including adopted and half siblings searching for two family lines, and all four teams are hoping to find at least one biological parent. We are proud to continue to present a show that helps deserving people explore their roots while offering a touching, exciting viewing experience for families to share together.”

The new diverse lineup for this season includes Team Red, adoptive sisters Liz and Maria Clifton from New York City, who were both adopted into the same family as infants and are searching for each of their biological families; Team Blue, husband and wife Demetrius and Chonta Flowers from Atlanta, who are looking for answers about Demetrius’ biological father; Team Green, half-brothers Marcus Taylor and Keith Breedlove from Los Angeles who are hoping to meet relatives on their respective fathers’ sides as well as shared family on their mother’s side; and Team Black, identical twin sisters Kaley and Kristin Dignen from Orlando, Fla., who are looking for their dad and his family.

Armed with only paper maps, a loaner car and a flip phone with a camera, each day the teams receive instructions via text message to navigate to a designated city and complete a challenge that leads them to their previously unknown relatives. The last team to finish each day receives a strike, and after three strikes, a team is eliminated. Season five of “Relative Race” begins in St. Louis, the “Gateway to the West,” from which the teams disperse in all directions throughout the United States to meet their relatives.

Co-winner of the 2016 Cynopsis Media Best New Competition Reality Series award, the fifth season of “Relative Race” will air 10 episodes. For the fifth consecutive year, BYUtv teamed up with Utah-based veteran reality TV and documentary production company Lenzworks to create the race and challenges. The show is hosted by Dan J. Debenham, Lenzworks’ principal, executive producer and former ESPN executive producer, who has been working in the television and production industry for 30 years.

In addition to “Relative Race,” BYUtv’s original programming slate includes the new scripted adventure comedy “Dwight in Shining Armor,” in which the Middle Ages meets Middle America; the long-running sketch comedy series “Studio C,” which touts over 1 billion views on YouTube; “Random Acts,” an unscripted hidden-camera reality show that highlights the altruistic nature of human beings by featuring real people who are the recipients of random acts of kindness; and the new cooking competition series “Dinner Takes All” that’s all about food, family and fun. BYUtv is available across the country via cable, satellite and multiple digital media platforms.”

What do you think? Have you seen Relative Race? Will you watch the new season?