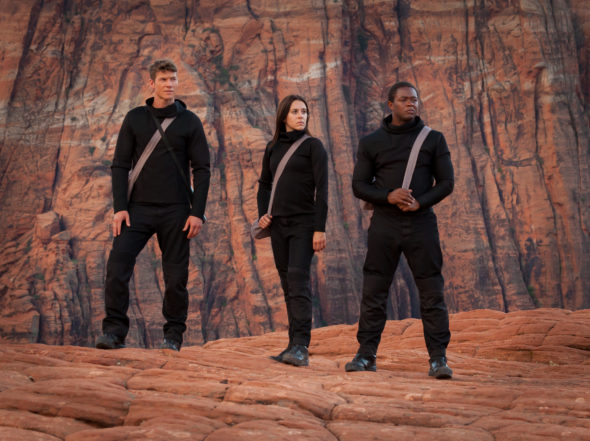 Extinct has gone the way of the woolly mammoth. BYUtv has cancelled its Extinct TV show after one season of ten episodes. In a refreshing turn of events, the non-profit network issued a statement acknowledging the Extinct cancellation, and didn’t try to reframe it as as a “limited event series” which was always intended to be a single season program.

A post-apocalyptic science fiction drama from creators Orson Scott Card and Aaron Johnston, Extinct stars Chad Michael Collins, Victoria Atkin, Jaclyn Hales, Yorke Fryer, Jack Depew, Matthew Bellows, and Jake Stormoen. The BYUtv series kicks off with aliens regenerating the human race, 400 years after its extinction. Now that they’re back, those who have returned embark upon quest to understand what is going on and why they are here.

The BYUtv original scripted sci-fi series, Extinct, will not be renewed for a second season

Since the season finale in November, many of you have inquired about a second season of Extinct. This is a decision we have carefully considered since this breakout series launched earlier last year. As with any program or series on BYUtv, decisions like this are difficult, and never made without considerable analysis. After much discussion and debate, we have decided to not renew Extinct for a second season.

We recognize many of you will be disappointed to hear this. Like you, we understand the feelings when a beloved show is canceled. Unfortunately, the approval and cancelation cycle is part of the ebb and flow of any television network. But we wanted you to understand why we reached this decision. Unlike most networks who make renewal decisions based solely on audience size and the resulting financial impact of those ratings, we as a non-profit, cause-based network have the luxury of using broader, more qualitative data points. For example, we weigh the content and message of the series itself, its resonance with fans, its uniqueness in the TV landscape, and ultimately its ability to live up to our strategic aims as a content source that connects with families.

To be sure, Extinct was a bold experiment into this genre for BYUtv. And we were proud to bring this series to you. We’re grateful to our talented production partners on Extinct including GoFilms, Taleswapper, Orson Scott Card, and the remarkable cast and tireless crew of the series. Most of all, we appreciate you—the passionate fans of the show. While the Extinct chapter may be ending, the good news is that BYUtv is more committed than ever to producing unique, innovative, and purposeful stories that families can watch together.

Thank you again for your loyalty and trust as a viewer. And please stay tuned as we pledge to bring you even more world-class television for families in 2018 and beyond.

What do you think? Did you watch the first season of the Extinct TV series? Should BYUtv have cancelled or renewed Extinct for a second season. Sound off, in the comments.

Oh, bollocks! Unfortunately, this statement didn’t explain anything. The show was actually a solitary ray of light… …

Extinct was a great show and could have gained a big following. Nowadays too many production companies are too scared of their own shadows .I.e. taking a risk or taking a punt on an idea that doesn’t start to take off straight away. So many new and original sci fi series have been cancelled after one season. Its a bit like reading a brilliant book only to find when you get to the end that the last page has been torn out. So it’s no wonder people don’t commit to a new series as you get involved in it and… Read more »

I really enjoyed them show Extinct. I think the Byu producers should have made a commitment to follow trough with a second season, instead of being scared of doing their right thing.
Shame!

I was super disappointed that there wasnt going to be a new extinct season, they were acting like they didnt want the fans to know. BYUtv get your act together

Bring it back,it was a great story line and deserving of at least one more season to fill in the missing pieces and leave us the audience with that feeling that the human race will endure in the face of all adversity !!!!

This was one of the best sci fi shows ever! Nothing inappropriate or sexually explicit ever happened. I read the comments about the ebb and flow of TV land, but cancelling Extinct shouldn’t be any part of it!!! PLEASE bring back this wonderful series! I believe BYU TV is out of touch with what it’s AUDIENCE wants.

I was sorry to see Extinct go. It had a lot of promise and it wasn’t all the blood & gore that so many shows today have & had a lot of good in it. It’s a shame that BYU is so out of touch with some of their viewers.

Is not hard to score an A, is hard to keep it. They weren’t able to sustain this series.

i enjoyed extinct alot and was hoping there would be a new season!

Ya why did it have to end?

The only show on BYUtv I’ve ever watched, and likely the last. A good story line premise with promise of evolving into an even more interesting series. This is what speculative fiction is supposed to be and now it’s gone.

Too many of the BYU special programs are impossible to watch!! The background music drowns out the people talking!!!!! Hurtfull and so frustrating!! What can be done? This has been happening sence part way through Granite Flats. We will have to only watch shows with no music or stop period. We loved Extinct! So unique even my husband is watching the re-runs.

You need to bring the extinct series back. It was a sci fi story that did not rely on special effects which was refreshing.

I’m on episode 2 and the acting is wooden..all of it.
Another good idea dashed by poor casting and direction…