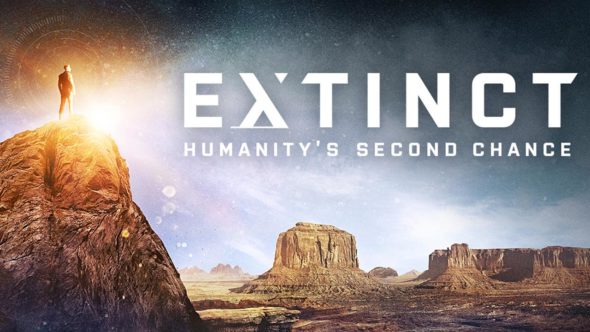 TV show description:
A post-apocalyptic science fiction drama from creators Orson Scott Card and Aaron Johnston, the Extinct TV show unfolds 400 years after the extinction of humanity. Now that aliens have regenerated the human race, mankind is on quest to find direction and make sense of it all, amidst ETs and advanced alien technology.

The action centers on Ezra (Collins), Feena (Atkin), and Abram (Fryer), who have been reborn centuries into the future. Despite vastly different backgrounds, they must learn to work together, in order to confront their pasts during this new and different season of their lives.

Once a proud grandfather, Abram has been reborn in his physical prime, yet he retains the lessons he first learned on Earth. This modest man of faith is resolute in his conviction that he must do the right thing.

A gifted hacker who once plied her trade irrespective of the law, Feena can’t forgive herself for her past actions, but she is loath to bare her soul to anyone. She shares a shadowy history with Duncan (Stormoen), a former Fed who tends to think before he acts, unlike most of his new allies.

Leadership is in Ezra’s very nature. This devoted family man may expect much of others, but not as much as he expects for himself. He will do anyone to protect his loved ones and their future.

Ezra can always depend on his wife, Lynn (Hales). On top of keeping their family together, she also exudes the sort of gentleness and concern that soothes people in times of trouble and helps them remember what is really important.

Meanwhile, if the road to Hell is paved with good intentions, then once upon a time, Silas (DePew) was the road crew’s foreman. Although he always tried to do good, his choices were bad enough that his brother Ezra usually had to rescue him from himself. Now, in this second shot at life, he finds himself in a dicey circle of people who look to him for leadership.

Finally, there’s Jax (Bellows). This quick, calculating, confident, cutthroat combatant has no love for his fellow man. Jax is hellbent on ending humanity — for good this time.

In this unfamiliar time and place, it difficult to discern what is really happening. Ezra, Abram, Feena and their allies must unite people, or they will end up subjugated, in one way or another.

Series Finale:
Episode #10 — “The Ancestor”
Abram makes plans to destroy the Ancestor, but Kylie takes matters into her own hands. The final battle between the Skin Riders and the Reborns begins, and the origin of the drones is finally revealed. (Courtesy of BYUtv.org)
First aired: November 19, 2017

What do you think? Do you like the Extinct TV series? Should this TV show have been cancelled or renewed for season two on BYUtv?

I really hope that there’s a second season

I had a chance meeting with the cast of “Extinct”. But I never had a chance to see the show until it showed up on You Tube. I think it was a good series. I am halfway through the nine episodes. And now realize it is a short run. I want more. Rocky…out.

The show was well acted, produced and written well. I became an avid fan. BYUtv please give the show another chance, for all the fans out here that would love to follow it. Please?

I liked the show and wish there would be a Season 2.

Great concept show. Has a lot of potential. The acting is only as good as the script writing and directing and producing. It is too slow for the adults is spend more time on their smartphone playing with Candy Crush or with their favorite social media site, I am surprised they even lasted a year. Orson Scott Card has a great idea how mankind thru what act of its own or act of arrogance is wiped and an alien species has mercy and for whatever reason desires to restore mankind. I liked I initially said at the beginning; it is… Read more »

I really love the show and hope you will renew it.

Finally a sci-finshow I can watch with my young girls! Please renew! We love it!!

I love the show, I m watching season one over for the third time. I really hope it’s not cancelled and if it is, I hope another station will pick it up.

I am so disappointed to find out that this show was cancelled.

SHould have been renewed it’s a great show loved it

The only show I’ve watched on byu tv more than one episode. I don’t understand why shows get cancelled when they have such good ratings.