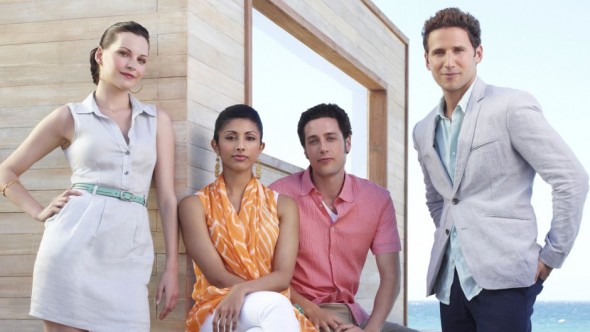 Tonight’s sixth season finale of Royal Pains ends with a cliffhanger. How’s it been doing in the ratings? Will the USA series return for a seventh season or will it be cancelled instead?

Year-to-year, Royal Pains is way down in the ratings. Compared to season five’s numbers, season six is down by a whopping 43% in viewership (averaging 2.03 million) and is down 35% in the 18-49 demographic (registering a 0.5 rating).

While those numbers are disturbing — and could certainly lead to the show being cancelled — all of USA Network’s scripted series are struggling and the cable channel theoretically can’t cancel everything.

Of the show’s chances for a renewal, co-creator and executive producer Andrew Lenchewski told TV Guide, “We’re optimists at heart and we think that the storytelling that we’ve done and the way the show has performed hopefully will earn us a Season 7. We really tried very hard not to let that uncertainty dictate how we wrapped up our stories this season. We really just wanted to tell the best stories we could with the most satisfying conclusions that we could and at the same time, make sure that we left room for new stories to be told if we do get the opportunity to continue.”

What do you think? Are you hoping that Royal Pains returns for season seven — or is it time for the series to be cancelled?

Love this show. I would hate to see it cancelled. It is very refreshing and the actors are wonderful.

Love the show. It’s just so fun and refreshing. You can’t say that about much on TV any more. Give it one more season for sure. Our family would hate to see it end. :O(

We’ve been watching from the beginning. This season was definitely the best. Don’t cancel. Too many good characters with great stories to tell. The bottle is nowhere near empty!

I too enjoy RP. it’s one of the only feel good USA shows I look forward to. NCIS and all the rest fulfill another genera but RP Is almost peaceful.

My wife and I both enjoy the show and would like to see a return for season 7.

Yes, it is one of the few shows I still watch, although I must admit I watch it ON DEMAND , so I hope the network are able to count the numbers from that source, because a lot of other watchers might be doing the same. I prefer Royal Pains, to Rush I do not think I like the premise in Rush, that Rush might be an addict, although that is possible in real life, I do not care to be reminded of the fact. yes, Hank came close to being an addict for a few episode but was skillfully… Read more »

Please don’t cancel Royal Pains! I look forward to this show! It’s one of the best written, best acted shows on USA network. If it does get canceled, please give us at least a 2 hr episode to wrap things up, don’t leave us hanging with the cliffhanger on this episode. Oh, yeah. No more Kardashians please!

“Royal Pains” is one of the few basic cable shows that I still watch. USA Network should give it a seventh season to end the series . . . at least.

Someone should start a petition and send it to the network.

Hate to see it end. It is the only program I watch on Tuesday evening. It is a shame a Kardashian had to be on the show. I suppose she needed the money.

I agree . Can’t believe she appeared but my guess network should get paid

I think Royal Pains is a great combination of good stories, good acting and beautiful locales. I would hate to see it end, and hope you’ll decide to continue for another season.

Please don’t cancel “Royal Pains”. I look forward to see this show every week.
Love all the characters. I am ready for a new season.

Please don’t cancel Royal Pains. I’ve watched the series from the first episode to now. It’s not fair to put a show on for years and to let people get emotionally invested and then take it off. That goes for The Glades and Dracula.