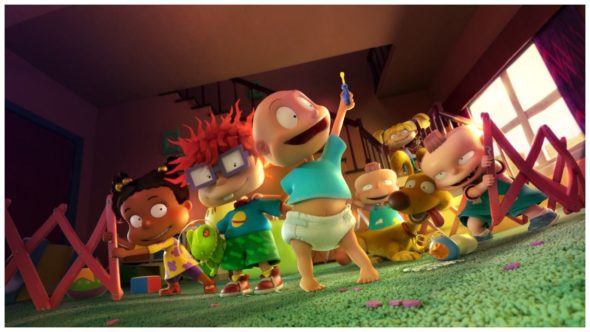 Rugrats is finally returning to series television. The 1990s animated show has been set for a revival since 2018 on Nickelodeon, but those plans have changed. Viewers will be able to see the return of Rugrats on Paramount+ later this spring with members of the original voice cast returning as well. The CG-animated series will follow new adventures for Tommy, Chuckie, Phil, Lil, Angelica, and Susie.

Paramount+ revealed more about the return of Rugrats in a press release.

“Nickelodeon is reuniting members of the original voice cast behind iconic toddlers Tommy Pickles, Chuckie Finster, Angelica Pickles, Susie Carmichael and Phil and Lil DeVille in the upcoming all-new Rugrats animated series. A reimagining of the classic ’90s hit, the CG-animated series stars E.G. Daily (Tommy), Nancy Cartwright (Chuckie), Cheryl Chase (Angelica), Cree Summer (Susie) and Kath Soucie (Phil and Lil), all of whom are reprising their iconic roles in this new series. Produced by Nickelodeon Animation Studio, the series is set to debut this spring on Paramount+, the highly anticipated streaming service from ViacomCBS.

“Rugrats is one of the most iconic cartoons recognized by fans around the globe, and this original version is one we are taking great care and pride in creating for a brand-new audience,” said Ramsey Naito, President, Nickelodeon Animation. “Having the voice cast behind these special characters come together is one of the essential pieces to making the show recognizable and we can’t wait to watch this talented group bring them to life again.”

The brand-new series features rich and colorful CG-animation and follows the toddlers as they explore the world and beyond from their pint-sized and wildly imaginative point-of-view.

The original Rugrats series launched in August of 1991 and instantly became a groundbreaking phenomenon, spawning consumer products and three hit theatrical releases, and cemented its place in pop culture history through its iconic characters, storytelling and unique visual style. Rugrats was in production for nine seasons over the course of 13 years. The series earned four Daytime Emmy Awards, six Kids’ Choice Awards and its own star on the Hollywood Walk of Fame.”

Check out a teaser for the Rugrats revival below.

Leave classics cartoon and sitcoms from 1990’s alone stupid idea hate new theme look weird animation a lot of different not going to last like original back then grow up with this stuff was best my first cartoon watch as kid love it.