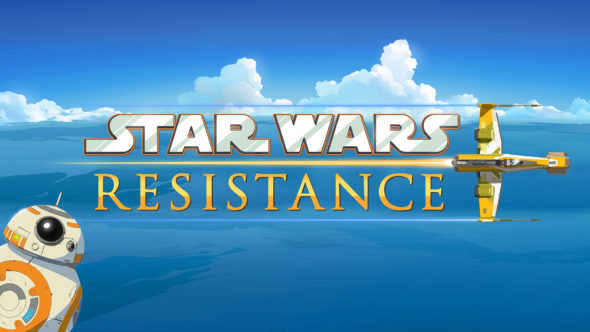 The animated series “follows Kazuda Xiono (“Kaz”), a young pilot recruited by the Resistance for a top-secret mission to spy on the growing threat of the First Order.”

Star Wars Resistance,” a new animated series that takes place prior to the events of “The Force Awakens,” takes flight with a one-hour premiere SUNDAY, OCTOBER 7 (10:00-11:00 p.m. EDT/PDT), on Disney Channel, DisneyNOW and Disney Channel VOD, with subsequent airings on Disney XD.

The high-flying adventure series follows Kazuda Xiono (“Kaz”), a young pilot recruited by the Resistance for a top-secret mission to spy on the growing threat of the First Order. Following its U.S. debut, “Star Wars Resistance” will rollout globally on Disney Channels Worldwide.

In the one-hour premiere titled “The Recruit,” Poe and BB-8 assign newly-appointed spy Kaz to the Colossus, a massive aircraft re-fueling platform on an outer rim water planet, home to colorful new aliens, droids and creatures. While undercover, Kaz works as a mechanic and lives with Poe’s old friend Yeager, a veteran pilot who operates a starship repair shop run by his crew: Tam, Neeku and their old battered astromech droid, Bucket. Kaz soon finds himself in over his head with his new friend BB-8 as he’ll have to compete in dangerous sky races, keep his mission a secret from his newfound family, and avoid the danger of the First Order.

What do you think? Will you check out Star Wars Resistance?